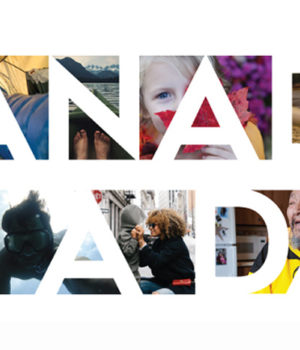 Canada In A Day will capture one day in the life of our country, and will air on CTV as part of Canada’s 150th anniversary of Confederation in 2017. CTV has also launched the project’s website, CanadaInADay.ca.

From countless individual moments and stories, one film will be crafted by director Trish Dolman (Eco-Pirate: The Story of Paul Watson; LUNA: SPIRIT OF THE WHALE) to capture Canada on a single day – engaging people across the country, and Canadians around the world, to share – in any language – their hopes and fears, their personal stories and, in doing so, what it means to be Canadian. From the ordinary to the extraordinary, footage submitted may be included in the final film project set to air on CTV or featured on the film’s online archive.

Canada In A Day is open to Canadian citizens, permanent residents, or landed immigrants across the country, or Canadians living abroad. Participants can film as much or as little footage as they want during the 24-hour period on Saturday, September 10, 2016.
Canadians have until midnight on Saturday, October 22, 2016 to submit their footage online.

Canada In A Day is looking for people to be creative, honest, and real, filming themselves and the people or places that mean the most to them. Participants should capture their passions, loves, fears, hopes, and dreams.

Canadians are encouraged to film and submit videos in their own languages.
To help Canadians decide what they want to film, there are four main questions they can ask themselves:

Participants can answer the above questions directly to camera, or showcase their answers with a visual response.

For more information, including video submission requirements and tips from director Trish Dolman on how to create a great video, people are encouraged to visit CanadaInADay.ca. Canadians can also sign up to receive alerts and updates during the countdown to the Saturday, Sept. 10 film day.

Canada In A Day is produced by Screen Siren Pictures Inc. in association with CTV, with the financial participation of the Canada Media Fund, Bell Fund, Creative BC, FIBC, and the Government of Canada. Executive producers are Scott Free Films, Trish Dolman, and Christine Haebler, with Trish Dolman and Michael Ghent producing for Screen Siren Pictures Inc. Switch United is the web producer and Innovate by Day is the Social Media producer.