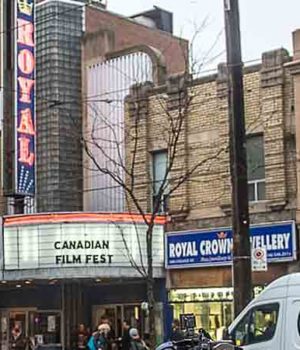 (March 1, 2017 – Toronto, ON) It seems as if March has become the official Canadian Movie Month. The big event is the Canadian Screen Awards, which kick off next Tuesday March 7th and wrap on the 12th with the Broadcast Gala Awards. March is also home to ever-growing Canadian Film Fest (CFF). Northernstars was there for the very first festival when it was unsure if anyone would show up and although the crowds were small the idea stuck and found Bern Euler is to be congratulated for sticking with the dream, nursing it through the years and now seeing it become a highly popular destination festival for Canadian filmmakers and fans of Canadian film alike. The 2017 version runs from March 21st to the 25th.

The big news is this year’s CFF has grown and changed its hosting venue. The festival has expanded from four days to five and this year the festival shifts from the beloved Royal Cinema (pictured) in the city’s Little Italy neighbourhood to the huge Scotiabank Theatre in downtown Toronto were all of the activities that are part of the festival can take lace under one roof.

“It was extremely difficult task to narrow down the selection from the stellar list of submissions, but we think this year’s final selection is exceptional,” commented Bern Euler, Founder and Executive Director of CFF. “We also couldn’t be happier or more excited about our partnership with Cineplex. Their generosity to us directly extends to Canadian filmmakers and proves their continued proactive support of Canadian artists.” He added, “We are grateful to the respective teams at the Royal Theatre and the Monarch Tavern, for without their support, we would not have grown to where we are today.”

Online ticket sales start March 7 and there is more information online at the festival’s website.