Canadian Film of the Day: September 10
by Staff

(September 10, 2018 – Toronto, ON) It’s sort of a girl wants boy, boy wants girl, but another boy wants the same boy and from one drunken incident friendships are torn apart, school and school activities become compromised and anger and recrimination abound.

Giant Little Ones has been described as “an intimate coming-of-age story about friendship, self-discovery and the power of love without labels.” It’s also about stereotypes, raging hormones, stupidity and a stolen bicycle. That’s the age of the people we’re dealing with. They’re still too young to drive, but have discovered booze, drugs and sex. They are children in adult bodies. Or maybe adults in teenager’s 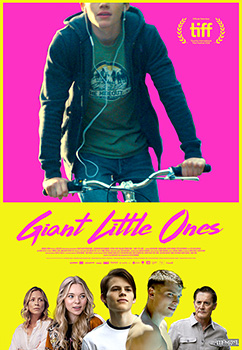 Giant Little Ones centres on 17-year-old Franky Winter (Josh Wiggens) and his lifelong best friend, Ballas Kohl (Darren Mann). Outlining the plot, writer-director Keith Behrman, wrote “Things have never been better for these guys: they’re popular among their peers, stars of their swim team and are entering exciting new terrain with their girlfriends. It is a time when erupting hormones and flourishing sexuality are coupled with a naiveté still lingering from childhood, when relationships and loyalties are changing along with a shifting sense of self. Giant Little Ones dramatizes something unique to today’s teens. They are acting on the new levels of cultural acceptance for alternate sexual expression, yet still face old stereotypes and prejudices.”

Giant Little Ones had its World Premiere at TIFF yesterday and screens today at 6:45PM at the Scotiabank Theatre.