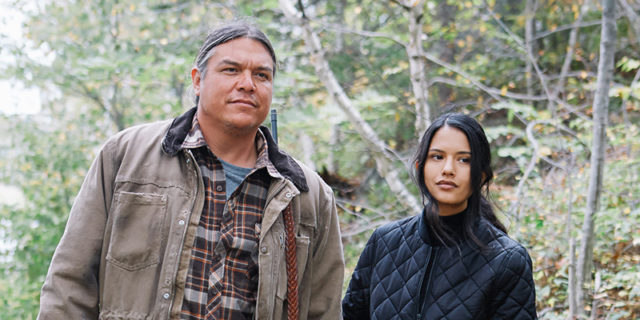 Canadian Film of the Day: September 11
by Staff

(September 11, 2018 – Toronto, ON) Our Canadian pick today is the feature Through Black Spruce, which enjoyed a Special Presentation at TIFF on Saturday. It screens again tonight at 9:45 at the Scotiabank Theatre in downtown Toronto, a few steps north of the Tiff Bell Lightbox. It’s final screening at TIFF will be this Friday.

Through Black Spruce, shot in English and Cree, features Tantoo Cardinal, Brandon Oakes, Graham Greene and a dazzling Tanaya Beatty in the lead role as Annie Bird, a Cree woman from James Bay who travels to Toronto to find her sister, Suzanne, who left the family home in the remote Northern Ontario community of Moosonee more than a year ago, and hasn’t been heard from since. Her disappearance has traumatized her family and triggers events in both Moosonee and Toronto, where she worked as a model before vanishing.

Defty directed by Don McKellar, the story, which is structured like a murder mystery, plays out with a balance of emotions, locations, good people and bad people, hope and despair. Produced by Serendipity Point Films, Through Black Spruce is the story of a family fractured by tragedy, and held together by love.