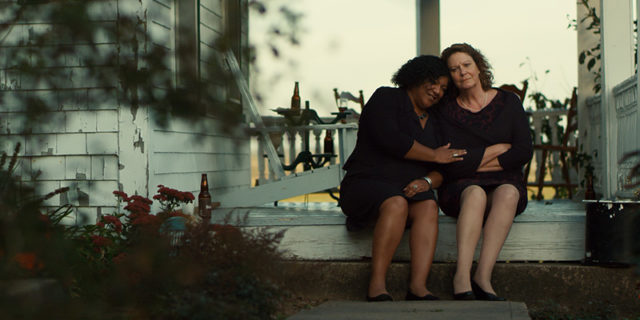 Canadian Film of the Day: September 12
by Staff

(September 12, 2018 – Toronto, ON) Our Canadian pick at TIFF today comes from a director that came to prominence twenty years ago with his very first feature film, The Hanging Garden. Nominated for more than 30 awards, the film or its director, Thom Fitzgerald won 18 awards including the Claude Jutra Award for Fitzgerald and Best Canadian Film at the Atlantic Film Festival and Toronto International Film Festival.

Here’s what we said, in part, about The Hanging Garden: “Thom Fitzgerald paints a striking portrait of what may be the ultimate dysfunctional Canadian family. Nova Scotian family to be precise. In a directorial debut achievement of stunning ability The Hanging Garden crosses time to capture the growing up of one Sweet William. Ten years after he disappeared from his family’s life, Sweet William returns home in time for his sister’s wedding.”

Jump ahead twenty years and his latest feature, Splinters, isn’t a wedding but a funeral and we’re still in Nova Scotia and we’re still dealing with a dysfunctional family but this time the dysfunction is caused by a mother unable or unwilling to accept her daughter after she came out while still a teenager.

Based on the stage play by Lee-Anne Poole, Splinters centres on two strong-willed women. Belle (Sofia Banzhaf) and her conservative mother, Nancy (Shelley Thompson). It screens tonight at 10:00 at the Scotiabank Theatre.