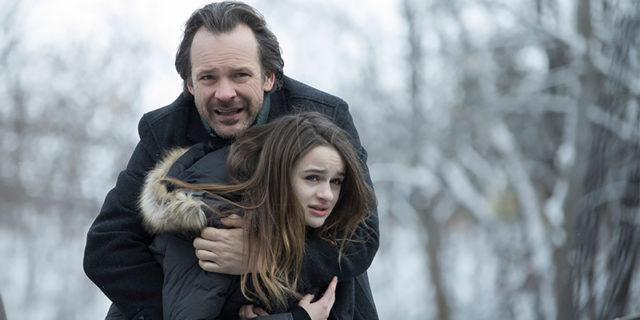 Canadian Film of the Day: September 13
by Staff

(September 13, 2018 – Toronto, ON) If the names Mireille Enos, Peter Sarsgaard and Veena Sud seem familiar, chances are you saw them in the end credits for one of the best series ever made, The Killing. All three names show up again in our Canadian film of the day today at TIFF. Titled The Lie, it’s actually a Canada-U.S. co-production and key members of the cast are Canadian as is writer-director Veena Sud, who has spent most of her life in the United States.

The Lie is a Hitchcock-style thriller. Kayla (Joey King) is a bundle of nerves and frustration as she drives with her parents Jay (Peter Sarsgaard) and Rebecca (Mireille Enos) to a ballet retreat. It’s winter, so when they spot Kayla’s friend waiting for a ride at the side of the road, they pick her up. But something happens between the two girls during a rest stop near a river. When the parents come to get them, the friend is gone and Kayla is freaking out. Kayla says pushing her friend into the freezing water was an accident. But murder is murder. At first Jay and Rebecca want to do the right thing, but Rebecca is a lawyer and knows they’re already implicated. As the weight of losing everything descends, these two parents, estranged for years, begin to do their dangerous work together.

The Lie had its World Premiere at TIFF on September 8. It screens twice today, at 6:30PM at Roy Thomson Hall and at 8:00PM at The Elgin Theatre. It will screen again tomorrow and also on the last day of the festival, this Sunday, September 16.