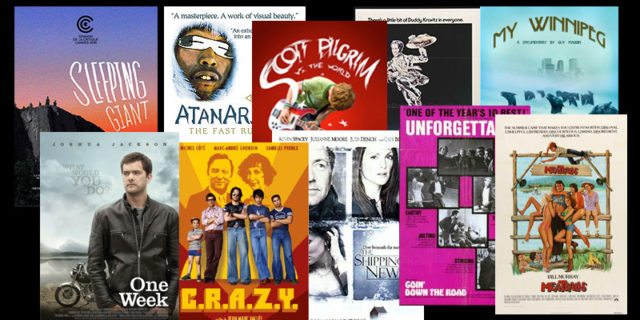 (July 1, 2018 – Toronto, ON) It was a moment of clarity years ago when I interviewed the CEO of a Toronto-based company that specialized in digitally erasing Toronto landmarks, especially the CN Tower, from Hollywood movies shot in Hollywood North.

We had become a nation of background performers, our country a chameleon. Sure, the Americans gave us billions of dollars to pretend to be New York or Chicago (or in the case of Manitoba, Antarctica), but at what price?

Happily, the hometown filmmakers never forgot where they came from (or still were). Watching Andrew Cividino’s 2015 film Sleeping Giant – about teens living through an aimless summer outside Thunder Bay – I fairly felt the sun bake down as I watched adolescents jump off cliffs composed of the oldest rock on Earth, the 1000-mile-wide bald spot that remained after a mile of ice carved its way across the top half of North America.

In my own teens in the Lakehead, I believe I jumped off some of the very cliffs in the movie. So, this Canada Day weekend, let’s consider some of the other filmic experiences that remind us who we are.

ONE WEEK (2008): Joshua Jackson firmed up his Canadian bona fides forever with his performance in Michael McGowan’s beloved film about a Toronto professional who is diagnosed with Stage 4 cancer and decides to do a bucket list motorcycle tour of the entire country. His journey includes, as anybody’s should, stops along the way for things like the Wawa Goose, Sudbury’s Big Nickel and Dinosaur Provincial Park in Alberta.

SCOTT PILGRIM vs. THE WORLD (2010): Other films have offered sharp snapshots of Toronto. Reg Harkema’s Monkey Warfare portrayed aging hipsters in Kensington. Bruce McDonald’s Broken Social Scene-themed drama This Movie Is Broken captured that special smelly summer of 2010 when the city suffered through a prolonged garbage strike. But it’s nice that a Brit, Edgar Wright, thought to use Hogtown as its own backdrop in this quirky, graphic novel-based movie about a guy (Michael Cera) who must face each of his girlfriend’s ex-boyfriends in ritual combat to prove his worth. Casa Loma, Pizza Pizza, the Second Cup and yes, the CN Tower all take their bows.

THE SHIPPING NEWS (2001): Tarnished somewhat these days by the doings of its star Kevin Spacey (and featuring uncharacteristically laconic Newfoundlanders), this Lasse Hallstrom take on Annie Proulx’s Pulitzer Prize-winning novel is all cliffs and coves and mist in its stark and beautiful representation of the fictional village of Kil-Claw.

MY WINNIPEG (2007): It’s a Guy Maddin film, so some of the fever-dreamish things didn’t happen (like a herd of horses being frozen alive in the Red River). But yeah, there was a picture of the Queen in the old Winnipeg Arena that was the size of a Jumbotron. And the Bay cafeteria, with its old-school jello-dessert menu, really was a bit of a hangout. Winnipeg is best experienced as a fever dream anyway.

ATANARJUAT: THE FAST RUNNER (2001): Zacharius Kanuk’s masterpiece based on a millennium-old Inuit folk story is as close to actually living off the snow and seals in Nunavut as most of us will ever get. Between the riveting story of a cursed love triangle, the movie seamless and lovingly weaves Inuit traditions of hunting and crafts. An unforgettable film, worth repeated viewings.

THE APPRENTICESHIP OF DUDDY KRAVITZ (1974): You could honestly choose any of the films adapted from a Mordecai Richler novel (Joshua Then And Now or Barney’s Version) for an evocation of Montreal – the English and Jewish side of it, anyway. This one best evokes Richler’s St. Urbain neighbourhood and the various smoked meat delis and characters that populated it.

C.R.A.Z.Y. (2005): Meanwhile, for a true, nostalgically painted French-Canadian slice of life, you couldn’t do much better than Jean-Marc Vallee’s transcendant tale of growing up gay and loving David Bowie in the working class Eastern Townships in the ‘70s.

FUBAR (2002): To the chagrin of those trying to upscale the city’s image, this mockumentary about Terry and Dean, two head-banging best friends who learn to “give ‘er” and “drink like a man,” has become a cult favourite – especially in Calgary where it’s set. Not the side of the city they normally show Conde Naste magazine. The sequel sent them to the oil patch to look for jobs.

MEATBALLS (1979): A classic for the mere tour de force performance by Bill Murray alone as head counselor Tripper. But this comedy comes by its representation of summer camp life honestly, being set at the real-life Camp White Pine in Haliburton. (The camp still operates, and crazily, does not have a pic of Bill Murray on its website).

GOIN’ DOWN THE ROAD (1970): The granddaddy of Canadian road trip movies, Don Shebib’s movie starred Paul Bradley and Doug McGrath as two lifelong friends in Cape Breton who set off for “the good life” in Toronto in a beat-up old sedan with “My Nova Scotia Home” painted on it. Things being as they are, a lot of the East Coast still looks like that.

It’s Only The End of the World in Oscar® Race