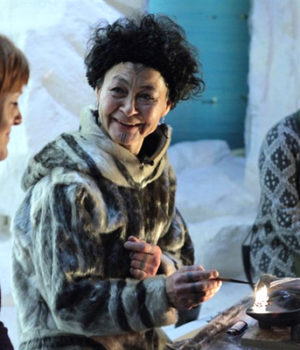 (May 2, 2016 – Toronto, ON) Six Canadian films caught our attention on today’s schedule at Hot Docs, or more officially the Canadian International Documentary Film Festival. Some are screening within the Canadian Spectrum program and some are in other programs. We couldn’t decide if we should look at them in alphabetical order or by scheduled screen time and a toss of a loonie made the decision for us.

Up first today is the 2nd screening of Aim for the Roses. Northernstars has interviewed the director, John Bolton, and we plan to have that video interview online this week. Aim for the Roses is a unique look at two of Canada’s truly unsung contributors to our nation’s population. One is Ken Carter, a mildly successful showman who in 1976 hyped a feat so extreme it became the stuff of legend: with a rocket-powered car and a ramp, he planned to jump a one-mile span of the St. Lawrence River and land in a bed of roses. The other is Mark Haney who decided Carter’s epic stunt deserved a musical treatment in the form of a concept album for solo double bass, based on using the mathematical pi number to dictate the tone and length of each note in his composition. Today’s screening is at 1:15 at the TIFF Bell Lightbox and your last chance to see this remarkable cinematic storytelling will be on Friday May 6th at 1PM back at the Scotiabank Theatre.

Living With Giants had its World Premiere at Hot Docs yesterday. It’s second run is today at 4:30 at the Scotiabank Theatre in downtown Toronto. Told from the point of view of a blossoming but troubled romance between two teenagers, Living With Giants interweaves mythic spirit animals with the activities of daily life into an intimate portrait of a remote community in Northern Quebec. Deeply rooted legends, the spirits of his ancestors and the harsh realities of a changing Arctic surround Paulusie, an imaginative and sensitive Inuk teen. A skilled hunter, a caring son for his elderly parents and a doting boyfriend, Paulusie is optimistic, happy with his life and his love of solitary hunting. But when alcohol is smuggled into his dry community for a graduation party, Paulusie—in a fit of jealousy—makes a mistake that will change the course of his and his loved ones’ lives forever. It’s last screening will be this Saturday, May 7 at 3:15PM atbthe TIFF Bell Lightbox.

Staying in the north, Angry Inuk will have its World Premiere tonight at 7PM at the TIFF Bell Lightbox. THat’s a still from the film above. If you have some image of a pristine north where technology has yet to have an impact, you’d better think again. The angry people in this doc are fighting back against outside pressures by effectively using social media. The main focus is seal hunting. From Pamela Anderson to Paul McCartney, celebrities have voiced their outrage as part of anti–seal hunting campaigns supported by many high profile supporters and hefty financial contributions. How does a culture that exercises understated anger and finds peaceful ways to resolve conflict compete with animal activist groups? Filmmaker Alethea Arnaquq-Baril uses her skills to organize and embolden a new tech-savvy generation of Inuit to stand up for their rights. Establishing #sealfie on Instagram and skillfully employing social media, they lobby legislators and expose misinformation while staying true to their values in their fight for survival. Angry Inuk screens again on Wednesday, May 4th at 1PM at the Isabel Bader Theatre and returns to the TIFF Bell Lightbox for its final screening on Saturday, May 7 at 6:45PM.

The somewhat quirky How To Build a Time Machine is one of those films not in the Canadian Spectrum series but playing within a program titled The Pursuit of Happiness. Any mention of time machines brings the name H.G.Wells to the fore and this film was inspired by the science-fiction author. The book itself, published in 1895, has been made into a movie in 1960 and again in 2002. This film teams an animator with a physicist as they pursue very different approaches to time travel. How To Build a Time Machine from director Jay Cheel will have its World Premiere tonight at 6:30 at the Isabel Bader Theatre. It plays again at 10AM and on Saturday, May 7 at 8:45PM at the TIFF Bell Lightbox.

Also look for Wizard Mode, a doc co-directed by Nathan Drillot and Jeff Petry. Subject matter? The film focuses on two of the world’s best pinball players and enjoys its World Premiere tonight a 7:15 at the Scotiabank Theatre.

Yet another World Premiere is the uplifting doc Gun Runners by director Anjali Nayar. It tells the story of two of the most notorious warrior’s in Kenya’s Great Rift Valley who trade in their AK-47s for a pair of running shoes and a chance to make a living in the far less dangerous world of professional marathon running. Catch Gun Runners tonight at 9:30 at the Tiff Bell Lightbox.

Click here for a list of all the films screening today and everyday during the 2016 Hot Docs Film Festival.