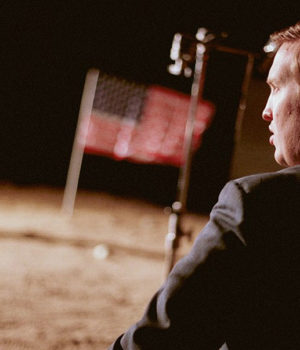 (January 25, 2016 – Toronto, ON) If there’s a buzz coming out of this year’s Sundance that seems to have a distinctly Canadian accent, it just could be all the talk director Matt Johnson is creating with his latest film, Operation Avalanche. It’s one of three Canadian feature films, four virtual reality works and eight short films with official selection status at the 2016 Sundance Film Festival, which runs until January 31 in Park City, Utah.

Operation Avalanche could be dismissed as just another “found footage” romp through the editing suite, but coming from the director who gave us The Dirties which was a rather dark take an a school shooting that had some great comedic overtones, this new film goes after the hearts and minds of Americans by challenging the truth of whether or not man ever walked on the moon.  Matt Johnson actually makes a pretty good case by bending the truth and relying on the gullibility of a nation that invented conspiracy theory as a parlour game thanks to the botched JFK assassination investigations. We won’t spoil the ending but mark this one as a “must see” when it gets released later this year in Canada.

Also playing in the land of snow and more snow is the Canadian animated feature Snowtime! It had been breaking box-office records in Québec and it will have its international premiere screening at Sundance before an English version opens in Toronto and elsewhere in February. It’s an animated remake of the 1984 film The Dog Who Stopped the War (La Guerre des tuques) and

was directed by ace animator François Brisson along with Jean-François Pouliot, who directed La Grande Séduction which was the winner of the Audience Award (World Cinema–Dramatic) at Sundance in 2004. This particular film is one of the three standouts of Sundance Kids, a program aimed at young film fans launched last year.

Director Shimon Dotan returns to Sundance with the world premiere of his documentary, The Settlers, a France-Canada-Israel-Germany co-production. The film focuses on Jewish settlements in the West Bank. Dotan previously won a Special Jury Prize in the Sundance Word Cinema Documentary section for his film Hot House in 2007.

Commenting when the selection of these shorts was announced last December, Carolle Brabant, Executive Director of Telefilm Canada pointed out that “Canadian short films account for more than 10 percent of the shorts in the Sundance lineup.”

Finally, as part of the New Frontier – Virtual-reality works program Canada is represented with Nomads: Maasai and Nomads: Sea Gypsies. A production of Felix & Paul Studios — founded by artists Félix Lajeunesse and Paul Raphaël — the company returns to Sundance with these two immersive works that look at the Maasai and Bajau tribes in Africa.

Then there’s the Unknown Photographer. This virtual reality project by Loïc Suty, Osman Zeki and Claudine Matte was screened at this year’s Rencontres internationales du documentaire de Montréal. The documentary offers photographs of the First World War that were found in an abandoned building in the Laurentians. Narration is by actors Julian Casey and François Papineau.

And finally there’s Cardboard Crash. In this work, artists Vincent McCurley and Loc Dao question the ethics of artificial-intelligence algorithms in self-driving cars when the vehicles are faced with an unavoidable crash event.

Click here for a link to Sundance and other January 2016 film festivals.