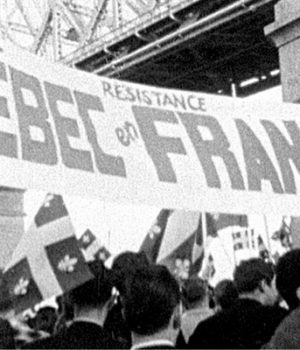 (April 30, 2016 – Toronto, ON) November 15th of this year marks the 40th anniversary of the Québec election that first brought the separatist Parti Québecois and its charismatic leader René Lévesque to power. Tonight at 6:45 at the Tiff Bell Lightbox the film Quebec: My Country Mon Pays gets its first of three screenings during the Hot Docs Canadian International Film Festival.

Written, produced and directed by John Walker, this documentary should be required viewing by Canadians of all ages. There are the mostly aging 500-thousand who opted to leave “La Belle Province” in the months and years following that election. There are the children of those linguistic refugees who might like to know a little bit more about their familial roots. There are the newcomers to our shores who probably have little or no idea that this somewhat idyllic nation was once on the verge of destruction and suffered an unprecedented period of violence that could have become much worse.

This is a learned cinematic journey back in time, yet it is also a capsule of how things are today in Québec. And it is at times a highly personal story triggered by the death of Walker’s father and the decision to have him buried in Québec after years of living in Toronto.

Like most documentaries there are many on-screen contributors who add their own insights and comments helping to shape a narrative that is at times funny and at other times sad. These contributors range from a police officer who diffused FLQ bombs to director Denys Arcand, who at one point suggests the revolution in his province petered out because of swimming pools.

Quebec: My Country Mon Pays also screens on Tuesday, May 3rd at the Tiff Bell Lightbox and on Sunday May 8th at the Scotiabank Theatre.

Other Canadian docs playing today include the second screening of Matt Gallagher’s How To Prepare For Prison at 10:15 this morning at the Isabel Bader Theatre. Beaverman screens as part of the Focus on Rosie Dransfeld series. It’s playing at 2:30 at the Scotiabank. Look for A Centre-Sud Tale at 4:30 at the Innis Town Hall. It’s from director Danic Champoux and it’s a very intimate and oddly loving look at a part of the city of Montreal that is far from skidrow yet seems to teeters on the brink of revival or complete failure as hookers and drug dealers populate the same streets as children and nobody seems to care.