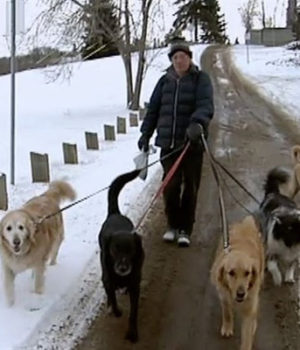 (May 5, 2016 – Toronto, ON) The Canadian films today at Hot Docs are bookended by dogs. The first, and it’s probably too late to catch the 10:15 screening, is A Dog’s Life at the Isabel Bader Theatre. Director Hélène Choquette has created a touching film about the companionship between the homeless and their pets. As Lynn Fernie writes for Hot Docs, “In large cities with a substantial homeless population, it’s a common sight to see panhandlers on the sidewalk huddled up on a cold winter’s day with their loyal dogs. Some wonder how they can afford to take care of a pet, let alone themselves. What’s important to realize is that these dogs provide many homeless people with a lifeline-they offer unconditional love to those who have often suffered abuse, as well as stability and warmth on cold nights. But few shelters accept pets, forcing people already isolated and marginalized to make the incredibly difficult decision to give up their beloved animals if they want a roof and a bed.” A Dog’s Life screens today at 10:15 at the Isabel Bader Theatre and has its last screening on Saturday at 1:30 at the TIFF Bell Light Box.

Much later, at 8:30 tonight, it’s The Dogwalker, one of five films from Rosie Dransfeld who is enjoying a special tribute thanks to the Hot Docs “Focus” progam. The Dogwalker, released in 2007, is about just that. But who he is and how he came to be a dogwalker is the story. Michael Borowski (pictured) was just 6-years-old when he ran from the bullies that were tormenting him and ran head first into traffic. The accident caused a severe brain injury that affected him for the rest of his life. Now an adult, Borowski is many things, including an amateur playwright, a street philosopher and a beloved neighbourhood dogwalker. Unlike regular Hot Docs films that have multiple screenings, Rosie Dansfeld’s 5 films each get only one screening. The Dogwalker is on tonight at 8:30 at the TIFF Bell Lightbox.

Between the two there’s Random Acts of Legacy. It’s a compilation film that uses home movies. The title comes from director Ali Kazimi acquiring a random lot that once belonged to a middle class Chinese-American family. Kazimi uses the old reels to track their lives from the Great Depression to post-war middle America. The films were the work of Silas Fung, a commercial artist who was fascinated with the Chicago World’s Fair and was supported by his trailblazing wife who held a high position at an insurance company. Random Acts of Legacy screens today at 1:30 at the TIFF Bell Lightbox and again on Sunday at 4:40PM at the Innis Town Hall.

Click here for more information about all the films screening during the Hot Docs film festival.

Canadian Film of the Day: September 10