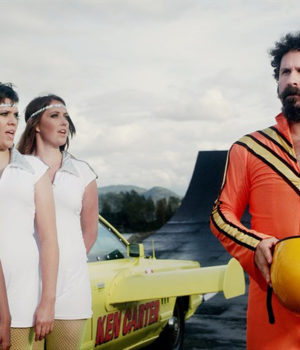 (May 6, 2016 – Toronto, ON) There just might be a sense of urgency for lovers of documentary films as the 2016 edition of Hot Docs approaches the homes stretch with only three days to go. As we wrote back in March when festival organizers and programmers released details of this year’s lineup, there were 232 official selections and retrospective titles, culled from 2,735 submissions from 51 countries. We were pleased to report that close to 40% of the titles were by women filmmakers. All of films we write about today are having their final screenings at Hot Docs.

Today’s Canadian films begin with Callshop Instanbul. Instanbul straddles two continents, Asia and Europe. Filmmakers Hind Benchekroun and Sami Mermer use the city’s numerous call centres to explore the its role as a gateway for migrants from West Africa, South Asia and Arab Spring countries seeking safe passage to the West. The audience becomes eavesdroppers on one-way phone conversations of longing, hope and frustration. Today’s screening of Callshop Istanbul is its 3rd and final screening at 10:30AM at the TIFF Bell Lightbox.

Three Canadian films are all crowded into noonish period today. Café Désirs and Off The Rails screen at 1PM. Aim for the Roses screens at 1PM and Rosie Dransfeld’s Anti-Social Limited screens at 2PM.

Lynne Fernie writing for Hot Dogs said this about Café Desirs: Café Désirs is a fascinating look at a generation of dissatisfied single young men living in the ancient city of Constantine in Algeria. Since the early 90s, when a bloody civil war broke out as a result of a struggle between the military and Islamist militants, the concept of haram—the forbidden—has demanded the rigid separation of men and women. And it has trapped Algerian men between strict religious virtue and sexual desire. The film follows three eloquent men who take us into the male-only world of cafés and hookah smoking to talk openly about their lives, frustrations about work and the social dangers of living in a sexually repressed society. It’s a world especially fraught for those with same-sex desires, which are illegal and severely punished. Café Désirs is an engaging exploration of masculine sexuality and gender politics in an Arab country still struggling with its colonial past.

Café Desirs is directed by Raymonde Provencher and its screening today at 12:30 at the Scotiabank Theatre is its last.

We must admit Aim for The Roses is one of our favourite films at this year’s festival. It is full of quirky, fascinating characters that we meet as director John Bolton weaves a tale of music and daring and how the two diverse universes came together in the mind of an eccentric Vancouver double bass player and composer. Aim for the Roses — that’s a promotional stll from the film above — is Bolton’s most accomplished film in his award-winning career. It has its last screening today at 1PM at the Scotiabank Theatre. Click to watch our interview the film’s director, John Bolton.

With Anti-Social Limited, filmmaker Rosie Dransfeld picks up the story of one of her most fascinating characters—Chris Hoard, who was first profiled by her in the film Broke. Hoard describes himself as a psychopath but there is plenty of evidence on screen that he is anything but. What is also clearly to see is that Hoard’s First Nation past plays into the many obstacles he experiences in his life. This is the only screening of Dransfeld’s Anti-Social Limited as part of the Hot Docs “Focus” on her career. It is also screening at the Scotiabank Theatre today at 2PM.

One of the two other Canadian films screening today is Gun Runners by director Anjali Nayar. It tells the story of two of the most notorious warrior’s in Kenya’s Great Rift Valley who trade in their AK-47s for a pair of running shoes and a chance to make a living in the far less dangerous world of professional marathon running. Its final screening is today, May 6 at 4:15 at the TIFF Bell Lightbox.

Also screening at 4:15 is A Centre-Sud Tale from director Danic Champoux. It’s a very intimate and oddly loving look at a part of the city of Montreal that is far from skidrow yet seems to teeter on the brink of revival or complete failure as hookers and drug dealers populate the same streets where children play and nobody seems to care. At the Scotiabank Theatre, this is the film’s final screening.

Click here for more information about all the films screening at Hot Docs.