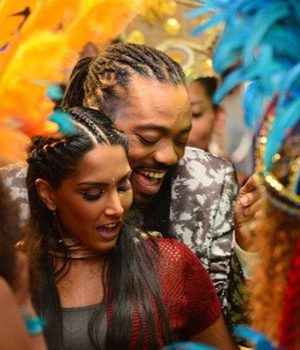 (September 7, 2016 – Toronto, ON) The 11th annual CaribbeanTales International Film Festival (CTFF) gets underway in this city tonight. Launching one day before the behemoth that is TIFF, the CTFF runs until September 21st and this year will showcase Caribbean films from 15 selected countries with public and community screenings. The lineup includes 9 feature length and 17 short films in competition for the CTFF Audience Prize, which will be announced on the last day of the festival.

“We are so proud to present our flagship event for the eleventh consecutive year” said founder and filmmaker Frances-Anne Solomon.

Hosted by the Trinidad and Tobago Consulate, the Opening Night Gala will feature a live performance by the group Freetown Collective and prior to the feature film Diary of a Badman by Diemiruaya Deniran, the festival will present the World Premiere of two short films created through the CineFAM-ACTRA Toronto Women Creators of Colour Short Film Challenge.

CineFAM is a new off-shoot of CaribbeanTales, whose mandate is to support bold original film stories by women of colour from around the world. CineFAM is a Haitian Creole word meaning films by women. Through a

partnership that includes ACTRA Toronto and Trinity Square Video, the goal is to recognize the importance of supporting creative leadership by and building production capacity for, women of colour creators, including directors, producers, and actors. As a result two films have been produced:

See Me Now by Light The Girl Productions was directed by Sharon Lewis and stars Ordena Stephens, a Jamaican Canadian actress known for the Canadian sitcom, Da Kink in My Hair. See Me Now is the story of a Burmese 81-year-old retired prima-ballerina who shows her Care Worker a new path to joy and passion through dance. The producer is Dharini Woollcombe, an actress and writer who holds a B.A. in English from Trent University and a B.F.A. Honours in Acting from York University.

Do You Remember Me is based on an original poem written by Aida DeWitt and was created and produced by Yazmin Ali-Tascatan and directed by Bailey Corneal and stars Rebecca Amare and Gabe Grey. Ali-Tascatan is an actor, writer and graduate of the Toronto Film School with a degree in Film and Television Production. Bailey Corneal grew up performing in front of an audience; from stage productions, to home videos, to the television screen. She is currently a student at Sheridan College, in their Advanced Television & Film post-graduate program.