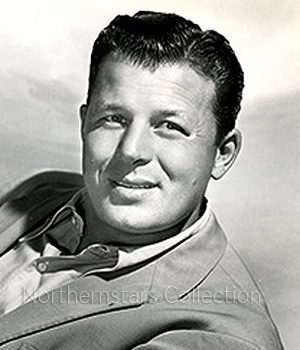 Jack Carson was one of the most popular character actors during the golden age of Hollywood with a film career that spanned the ’30s, ’40s and ’50s. Primary employed for comic relief, his work in Cat on a Hot Tin Roof proved he could also master dramatic material. During his career, he worked at RKO, MGM (cast opposite Myrna Loy and William Powell in Love Crazy), but most of his memorable work was at Warner Brothers. Carson’s trade mark was the wisecracking know-it-all who eventually and typically was undone by his own over self-confidence.

John Elmer Carson was born in Carman, Manitoba on October 27, 1910 to Elmer and Elsa Carson. Shortly afterwards the family moved to Milwaukee, which he always thought of as his home town. He attended high school at Hartford School, Milwaukee and St. John’s Military Academy, Delafield – but it was while attending Carleton College, Northfield that he got a taste for acting

Jack Carson, because of his size – 6ft 2″ and 2201bs – had his first stage appearance as Hercules in a college production. During a performance he tripped and took half the set with him. A college friend, Dave Willock, thought it was so funny he persuaded Carson to team with him in a vaudeville act – Willock and Carson, and a new career began. This piece of unplanned 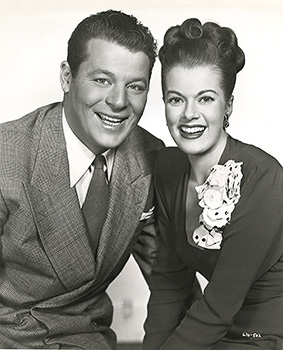 business would be typical of the sorts of things that tended to happen to Carson during some of his film roles.

During the ’30s as vaudeville went into decline due to increased competition from film and radio, Willock and Carson sought work in Hollywood, initially landing bit roles at RKO. Radio also proved to be a source of employment for the team following a 1938 appearance on the Bing Crosby Kraft Music Hall program. This lead to a number of other appearances which would culminate in Carson’s own radio show in 1943.

Carson’s success on radio lead to a more lucrative contract with Warner Brothers. Here he was teamed with Dennis Morgan in a number of films, supposedly to compete with the popular Crosby and Hope road pictures. Like Bing Crosby and Bob Hope, Morgan and Carson enjoyed a genuine off screen friendship. Their first film together was a dark drama called The Hard Way, which was nothing like their subsequent pairings, but it provided a glimpse of the kind of performance Carson was capable of delivering. However despite this auspicious beginning, most of his work at Warner Brothers was limited to light comedies with Morgan and later with Doris Day, who credited Carson as one of her early Hollywood mentors when she later published her autobiography. He is pictured with Martha Vickers in a publicity still for the 1947 film Love and Learn, which was scanned from an original in the Northernstars Collection.

Critics generally agree that Carson’s best work was in Mildred Pierce where he played the perpetually scheming Wally Fay opposite Joan Crawford in the title role. Other roles that brought accolades for Carson include that of Matt Libby, the studio press flak in Judy Garland’s excellent version of A Star Is Born (1954); and as Paul Newman’s older brother in the 1958 production of Cat on a Hot Tin Roof starring Elizabeth Taylor.

In addition to his work in film, in the 1950s Carson also made a number of appearances on television including The Twilight Zone and Alcoa theatre. In 1962, while rehearsing the Broadway play Critics Choice, he collapsed and was subsequently diagnosed with stomach cancer. Carson died in Encino, California in 1963.

This mini-biography is copyright © Northernstars.ca. For more information about Copyright, click here. All of the photos used in this biography were scanned from originals in the Northernstars Collection.