(October 14, 2016 – Toronto, ON) It’s not really about raccoons, but we love the photo that accompanies this story and have been waiting years to find the right story to attach it to. Turns out, there is a raccoon angle in a new comedy series that has received a green light (go ahead) from partners CBC and the US channel Comedy Central. And this one, titled Crawford, comes with a really terrific pedigree.

Crawford was created by Mike Clattenburg (pictured below), famous for the series and movies featuring the Trailer Park Boys, and is being executive produced by Laura Michalchyshyn (Trailer Park Boys, Chicagoland, The American West) and co-created by recording artist Mike O’Neill (Moving Day, Trailer Park Boys – Don’t Legalize It). The series centers around a young man who, after a run of bad luck, moves back in with his parents and turns his natural ability to relate to raccoons into a successful business, all while navigating life with his eccentric family. Production on the 13 episode debut season will begin here in 2017. Probably because Toronto is somewhat famous or maybe infamous for its raccoons. Porter Airlines uses one as its mascot. Content Media will handle international distribution for Crawford. 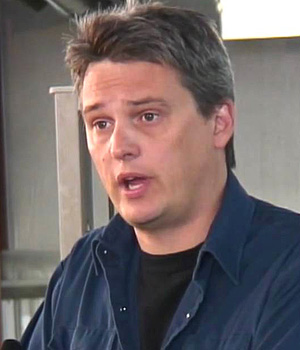 manager, programming, CBC Television. “We are excited to partner with the Rabbit Square team and Comedy Central to bring Mike Clattenburg’s raccoon whisperer to television audiences.”

The synopsis? What happens when you fail your exams for a Bachelor of Arts degree and your record label drops your Metal band on the same day? For 28-year-old Don, it means moving back home with your polyamorous parents and finding a job that comes easily. Don has always thought differently – ‘thinking sideways’, as his Mom puts it. Following intuition rather than logic is the unique approach that turns Don’s compassion for and affinity for raccoons into a booming business – just as the town’s raccoon population explodes. Does this sound like Toronto or what…???

“We are thrilled to bring the world of Crawford to life with CBC and Comedy Central. Have you experienced an unexpected arrival of raccoons, your mom’s lover, or the police knocking in the middle of the night? The residents of Crawford Street have,” said Mike Clattenburg, Mike O’Neill and Laura Michalchyshyn.

Commissioned by CBC in Canada and Comedy Central in the U.S., Crawford is produced by Rabbit Square Productions, Laura Michalchyshyn and Mike Clattenburg’s company. Janice Dawe and Kathy Avrich-Johnson will also produce for Bizable Media. The series deal was negotiated by Maggie Pisacane of Frankfurt, Kurnit, Klein and Selz and Bizable Media. Mike Clattenburg is represented by The Gersh Agency and managed by Echo Lake Entertainment

Cineplex Partners with The Black Academy