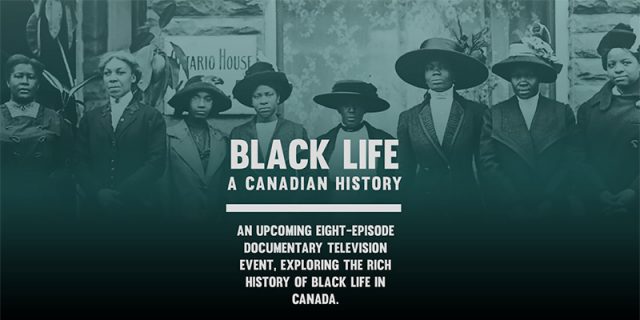 (September 16, 2021 – Toronto, ON) The CBC and showrunner Leslie Norville’s Studio 112 have announced that a new 8-part docuseries, Black Life: A Canadian History has been greenlit by the network.

The series will explore the rich history of the Black experience in Canada and show the vital role Black Canadians have played in shaping the country. While tracing the complex and hopeful stories of Black Canada, the series will reveal the truths of a history fraught with violence, racism, hardship, and perseverance.  Black Life: A Canadian History will illuminate the struggles and triumphs of Black Canadians, and celebrate the contributions of both famous and lesser-known individuals.  Epic in scope, the series spans more than 400 years with an eye towards contemporary issues, culture, politics, music, art, and sports.

“The docuseries will be an honest and nuanced look at Black Canadian history – and while some may find this uncomfortable, it’s critical to understand and grapple with the complexities of Canada’s past,” said Leslie Norville, showrunner and executive producer. “I couldn’t ask for a more talented team to help bring this rich history to audiences and to explore and celebrate the stories and people whose contributions have shaped the country we know today.  Miranda and I are delighted that Black Life: A Canadian History has found a home at CBC and value their support and enthusiasm for the project.”

The Miranda Norville will be working with is Northwood Entertainment’s Miranda de Pencier, as well as an exceptional group of creative talent, activists, and historical and cultural consultants behind this series. They include philanthropist and NHL All-Star P.K. Subban (Ugly Duck Productions) who is on board to executive produce as is the multi-hyphenated Nelson George, and co-executive producer and Black Lives Matter (Canada) co-founder Sandy Hudson.  Norville and de Pencier have also put together an unparalleled team of consulting producers and writers to bring this story to life.  Consulting producers, who have a substantial and ongoing role in shaping the series, include former Governor General the Right Honourable Michaëlle Jean, rapper and broadcaster Shad (Shadrach Kabango), and activist Ravyn Wngz.  The producers will partner with eight Black Canadian directors, one for each episode, who will bring their unique approach and style to the series.

“One of the many things that attracts me to this project is that it connects events across 400 years of history to the present day,” said Sandy Hudson, co-executive producer. “Reckoning with the past and confronting our present can be a foundation through which we imagine and build liberatory Black futures.”

“I can’t wait to share the educational and engrossing stories of Black Life: A Canadian History,” said P.K. Subban, executive producer.  “We’re pushing the boundaries of conventional storytelling to create a series that is gripping and dramatic in a way that audiences haven’t seen before.  The inclusion of everything from civil rights to sports, and justice to music, is sure to engage viewers across the country and around the globe.”

“CBC is honoured to partner with this remarkable team to bring the untold history of Black Canadians to audiences across the country with authenticity and depth, led by the lived experiences, insight and perspectives of Black storytellers,” said Sally Catto, General Manager, Entertainment, Factual & Sports, CBC.

Black Life: A Canadian History is produced by Studio 112 in association with Northwood Entertainment, and Ugly Duck Productions and is scheduled to premiere on CBC and CBC Gem in 2023.

SOURCE: CBC
Image from the website for the series.