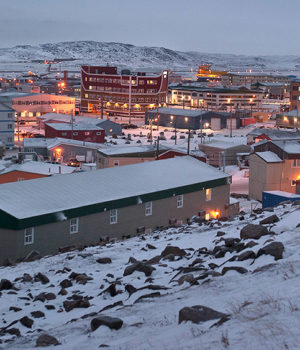 (March 16, 2016 – Toronto, ON) – CBC has announced the launch of a new series set in an unlikely location, Canada’s high north. Its working title is The Council and it comes from the fertile mind of one of Canada’s most successful television writers, Montreal-born René Balcer. The Council is set against the unfolding drama of a changing planet and draws inspiration from the true-to-life fight over the vast and valuable resources of the Arctic. The series traces the journey of two cops who uncover a small-town murder that is at the heart of a global conspiracy. Production kicks off this summer, shooting in Resolute, Iqaluit (pictured), London, Copenhagen and Manitoba and will debut with 10 episodes on CBC-TV this fall.

René Balcer is a 20-year veteran of the Law & Order franchise, beginning as a writer and rising to executive producer and showrunner. In 2001, he left the series to create the show’s spinoff Law & Order: Criminal Intent, which he developed with creator Dick Wolf. He is also the creator of the international drama JO. Balcer has won an Emmy® Award, Peabody Award, a Writers Guild of America Award and four Edgar Awards for his television work.

Known for his ability to weave complex mysteries with character-based drama, Balcer has had a lifelong interest in the Arctic and its indigenous culture. “The Arctic has engaged my imagination since I was a kid reading stories about the Inuit, and then as a college student working construction at the mouth of the Mackenzie River. The Council is a story where the stakes are as high as they come, about a land and a people who are the bellwether of our survival on this planet,” said Balcer. “It’s an exciting mystery and a political intrigue set against a wide canvas — climate change, indigenous extinction, competition for resources. As a story-teller, I couldn’t ask for more.”

“We are delighted to be partnering with such a strong team to bring Canadian audiences this riveting and relevant drama series,” said Sally Catto, general manager, programming at CBC Television. “It is an honour to be working with the remarkably talented René Balcer, who brings his unique voice and passion for the subject matter to shine a light on the Canadian north.”

The series begins on the edge of the Arctic frontier during the endless days of the polar summer when a young woman, a renowned environmentalist, is found ritualistically murdered near the Canadian hamlet of Resolute. An investigation is mounted by the local RCMP inspector Mickey Behrens, an outsider and new-comer to the north who is running from a derailed personal and professional life, and her partner, officer Jo Ullulaq. A soulful counterpoint to Mickey, Jo is torn between the duty to his job and loyalty to his Inuit culture. The pair quickly discovers that the mystery extends far beyond the borders of the town and to the backrooms of Canadian parliament in Ottawa, the dark corridors of U.S. intelligence in Washington, D.C., the halls of European parliament in Brussels, the airbases of world powers, and the migrant conflicts at the border of Norway and Russia. Yet it all traces back to the Arctic, as they gradually expose a complex international conspiracy to control the vast natural resources at the top of the world.

“René Balcer has created an intriguing mystery and dynamic characters stemming from his personal connection to the north and the Inuit culture. This story, emanating from a little known but much discussed part of our world, will resonate with Canadians and have world-wide appeal,” said Louise Clark, executive producer of The Council.