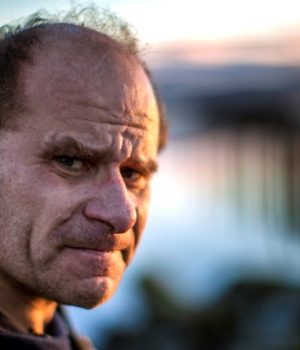 (April 30, 2017 – Toronto, ON) Hot Docs starts early today, Sunday April 30, when the film Hope screens again at 10:30 at the Tiff Bell Lightbox. Director Alan Zweig unveils what could be considered Chapter 2 in the story of Steve Fonyo. To remember the brave 18-year-old who ran across Canada after losing his left leg to cancer and to see him portrayed today as a fallen idol is at times maddening and at times very sad. Zweig’s first Fonyo film was titled Hurt. This one is titled Hope and ultimately that’s what this doc delivers. It is almost impossible not to hope that this once famous recipient of the Order of Canada has found a way to become the man the boy once was. NOTE: Northernstars has recorded an interview with Alan Zweig which will be posted as soon as it comes out of the edit suite.

Another of our favourite films, Shiners enjoys its second screening at 1:00PM at the Hart House Theatre . It’s an intriguing and eye-opening look about putting your best foot forward thanks to the people who make sure your shoes look their best. It’s a delightful and uplifting story of people who have chosen to serve some special calling. People who are proud of their work and who often come from some surprising former occupations. Shiners screens with the US short He Who Dances on Wood. If you miss Shiners today it will have its last of three screenings on May 4th.

Also at 1:00PM, this time at the Scotia 3, it’s the 65-minute doc Rue de la Victoire follows the life of a gifted performer who is forced to leave post-war Tunisia after the circus school he was attending closes. Pursuing his art in France allows him to see things differently and to come to terms with his past and his future after he returns home. Rue de la Victoire screens with the 20-minute short, The Botanist.

At 2:45 you can catch the Canada-Chile co-production Resurrecting Hassan. Director Carlo Guillermo Proto’s focuses his lens on a family of buskers who make their home in Montreal in this 100-minute documentary. Not special enough for you? Well, consider they are blind, and are still dealing with the almost impossible task of healing after the death of a child. They decide to seek the help of a Russian mystic healer to see if their second child, Hassan, can be resurrected from the dead. This screening is a World Premier and Resurrecting Hassan will screen again on May 2nd and 5th.

The touching and sometimes disturbing documentary A Better Man has bits World Premier tonight at 6:30 at the Isabel Bader Theatre. It’s a very tough look at a very tough issue. The issue is domestic violence and what makes this a compelling piece of filmmaking is the fact the abused and the abuser are brought together to examine what their life together was like a couple of decades ago. More compelling still is the fact the co-director, Attiya Khan, is the woman who was the young girlfriend taking the beatings. This is an emotionally powerful film and there are scenes that will slap you almost as hard as she must have been. Why the abuser would show up for this very public outing is contained in the film’s title. It will screen again on May 1st and 6th.

Also at 6:30 but at the Scotia 3, it’s the World Premier of Kalina Bertin’s Manic. This is an intimate look inside the director’s own family. Trying to understand her sibling’s bipolar disorder she also looks at the mysterious life of her father who was alternatively a cult leader and scam artist before he was murdered. This 84-minute feature documentary screens with the Canadian 7-minute short Hotel Moon from director Derek Howard.

At 9:30 at the Tiff Bell Lightbox its the World Premiere of The Road Forward from Director Marie Clements. She takes the idea of documentary in a refreshing new direction that is a musical, in the traditional form of all musicals, that knits together documentary elements about Indigenous artists, activists and musicians while at the same time laying down the history of Canada’s first Indigenous newspaper, The Native Voice, the history of the Native Brotherhood of British Columbia, and the Constitution Express, which 50 years later, few alive today remember. Another plank in the platform of documentary expression is its ability to teach without preaching. The Road Forward achieves this ideal brilliantly. This is, by the way, one of the films supported by the National Film Board’s initiative to reach gender equality in its filmmaking programs.

This is the 24th annual Hot Docs Festival screening 230 titles from 58 countries in 13 screening programs, with work by female filmmakers representing close to 48 per cent of the official selections. The Canadian International Documentary Festival runs until May 7.