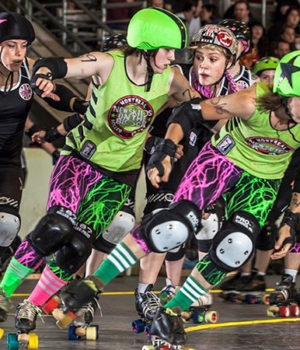 (April 28, 2017 – Toronto, ON) There are almost 40 films screening at theatres across the city today as the first full day of the 2017 Hot Docs Festival gets underway. Regular readers know our focus is strictly on Canadian films and so the selection is much smaller.

If you missed the opening Gala film last night, Bee Nation enjoys its second screening today. Students in Saskatchewan compete in the first province-wide First Nations Spelling Bee, trying to make their way to the national championships in Toronto. It’s a feel good story that allows non-Indigenous viewers a glimpse inside communities that we know so little about, only to discover that when it comes to kids, we all have the same hopes and dreams. Bee Nation screens at 2:00PM at the Ted Rogers Hot Docs Cinema on Bloor Street.
Also see: Bee Nation Launches Hot Docs

A little before that, at 12:45PM, one of the films in the Maya Gallus retrospective “Focus On” series will screen at the TIFF Bell Lightbox. Titled Derby Crazy Love (pictured), this 62-minute doc dates from 2013 and highlights not just the participants in the world’s most aggressive sport, but underlines their passion for roller derby as the film makes its way to the no-holds-barred championships. Great film if you need an adrenaline boost.

There are three docs this evening in the Canadian Spectrum program and their screenings overlap so you can’t see them all, but all films get multiple screenings during the festival. Look for Let There Be Light at 9:00PM at the Hart House Theatre, Who is Arthur Chu? also at 9:00PM at the Scotiabank 4 and the delightful Mermaids at 9:30PM at the Tiff Bell Lightbox 1.

Let There Be Light is for the scientific-minded or for those just curious about the future of the planet. Directors Mila Aung-Thwin and Van Royko investigate the attempts to create a small duplicate version of our sun here on earth. Why? Potentially abundant and cheap energy with no pollution. It’s a worthy quest if highly complicated and massively expensive, which is why this documentary makes for some very compelling story-telling.

Who is Arthur Chu? looks into the life of the 11-time winner who “hacked” the TV show Jeopardy! and won big, becoming one of the show’s most controversial contestants. He’s using his newfound celebrity to battle dark forces on the Internet as a blogger and cultural pundit.

Mermaids is a light romp with some deeper moments about our curiosity with the myths and realities of life as a mermaid. The archival footage from a Florida theme park is worth the price of entry alone. The cast of characters who all become modern day mermaids is fascinating and the “chapters” in the film are separated with very short mermaid myths which gives everything some historical perspective. Worth catching. If you miss it tonight it screens again tomorrow, as well as on Monday May 1st and next Friday, May 5th.

Click here for the complete lineup of films at the 2017 Hot Docs Canadian and International Documentary Festival.