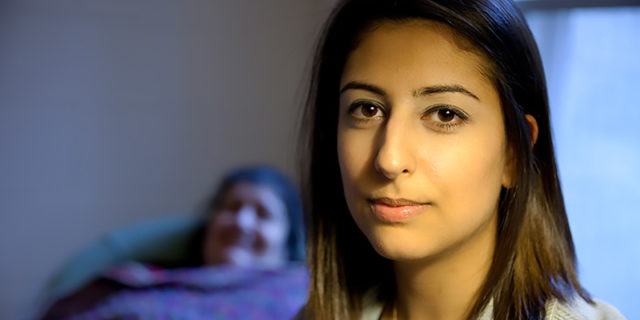 (January 10, 2018 – Toronto, ON) Anyone who has had to deal with a family member diagnosed with Alzheimer’s Disease or long after the diagnosis was made, knows the task is difficult, often painful and sometimes frightening. Award-winning producer-director Cynthia Banks is one of those people and last year she turned her cameras on the people who care for someone in their family. In Banks’ case, it’s her mother.

“This documentary began because I was angry at the healthcare system and I wanted to show the deficiencies in it but it ended up being about the true heroes who are the foundation of good care, providing dignity for our people with the disease. It is dedicated to my mom, Phyllis Banks, caregiver to my dad, Retired Toronto Senior Police Officer, Donald Banks.”


More than a year in the making, the result is a documentary titled The Caregivers’ Club and its timing is perfect since January 2018 is Alzheimer’s Awareness Month.

Relatives of dementia victims call themselves members of ‘the club no one wants to join.’ The Caregivers’ Club follows three families — their heartbreak, humour and frustration. It’s a devastating but ultimately inspiring journey thousands of families will be forced to take as our population ages.


Often called the forgotten ones because despite all the media coverage of dementia, those who actually care for loved ones at home, or accompany them through institutional life, are largely ignored or taken for granted. But they are the unseen and unsung everyday heroes who manage, in surprising ways, to stay strong and carry on without appreciation from society — or even their own patients.

Coping with dementia, including Alzheimer’s disease, is so much more difficult than dealing with a physical ailment, in large part because you never know what the loved one is thinking or going to do next. The great gift of human communication is extinguished. One caregiver calls it a “big gaping hole of unknown.” People ask: Does he recognize you? Caregivers often have no idea. They must satisfy themselves with fond memories, and yet sometimes a fragment of the original personality suddenly and briefly flares to life.  Is that you? Do you know me? Can you see what is happening to you, to us?

In The Caregivers’ Club we meet three middle-aged caregivers – Domenic, Karen and Barbara – each taking care of a spouse or parent, who can no longer take care of themselves.  All three are connected to Baycrest Health Sciences in Toronto where occupational therapist Nira Rittenberg provides advice, support, and consolation. All take you far beyond the practical problems of navigating a seemingly fickle healthcare system, and into the psychological challenges of coping with the deterioration of their loved ones.  Their stories unfold over a one-year period as they navigate the erratic stages of this cruel and relentless disease.

The world broadcast premiere of the The Caregivers’ Club is scheduled for Sunday, January 14, at 9:00 pm (9:30 NT).  It will also be available to watch online on Friday, January 12 beginning at 5 pm.

Directed by Cynthia Banks, produced by Michael Wheeler and Cynthia Banks and their production company Carrefour Productions Inc. and executive produced by Doug Grant. The Caregivers’ Club is produced in association with CBC, with participation from the Canada Media Fund.

Anne of Green Gables on PBS