I saw the highly anticipated Chloe while covering the 2009 Vancouver International Film Festival. It was standing room only in the festival’s largest house. Were some coming to see Liam Neeson perform, knowing the tragedy he faced during final filming in Toronto? The film begins with an urban obsession: Infidelity. Catherine (Julianne Moore), a gynaecologist, is the wife of music professor David (Liam Neeson). She plans a huge surprise, birthday party for him at their spacious, futuristic multi-level house. The caterers, and affluent friends wait, but he misses his flight. He says bad timing over the phone –– we see him with an attractive student.

Catherine goes down the road of suspicion with some new, dramatic turns. To calm her fears, find out for sure, she hires the beautiful, sensual Chloe (Amanda Seyfried) to test David’s fidelity. This student-like nymph is a hooker, the perfect attraction to snare David, if he is unfaithful. We are never really sure.

Chloe orchestrates a meeting, and the encounters begin in upscale landmarks and places of Toronto. Egoyan uses these places of money and security to establish the socio-economic context of the movie. It is Catherine and David’s world of comfort and security until Chloe. She comes from the underbelly of the same world.

Catherine’s office is in the wealthy district of Yorkville where she first meets Chloe ‘working’ at one of its expensive restaurants. Chloe’s encounters with David are always in similar lavish or trendy places, like the Windsor Arms, or the ‘Dip’ (Little Italy’s Diplomatico Café). Even, the Toronto landmark, Allan Gardens and its decrepit greenhouse are made 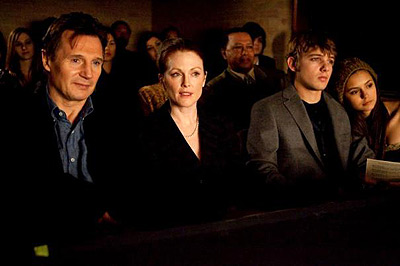 exotic and rich. Paul Sarosy’s (The Sweet Hereafter) luxurious cinematography gives Toronto’s richness a presence important for the lives and status of the film’s characters. It all exudes security, until Chloe.

Chloe begins reporting to Catherine who starts suffering immediately. She is deeply troubled by both the message and the messenger. The story becomes her suffering about a disintegrating marriage, her failure with her music prodigy son, and now mysterious feelings about Chloe who feeds these every time they meet.

Julianne Moore’s portrayal is vivid, capturing middle age nuances of the decline and fall of everything: Muscle tone, attractiveness, her own sexual interest, David’s interest in her.

The story, based upon Anne Fontaine’s French Film Nathalie, shows the tenuous bonds of marriage and emotional duplicity. Erin Cressida Wilson’s script never wallows in melodrama, or brooding introspection going no where.

Moore’s Catherine is a doctor, a person of science, and she captures the black and white of this empirical person. She has severe problems with her marriage and her own feelings. She is a doctor use to problem solving: First a diagnosis, then prescription or treatment, and then wait and see, ready to do more. You believe Moore is a doctor, just as she convinced me she was a 1950’s housewife, also with a marital crisis, in Far From Heaven where she tries solving her husband’s (Dennis Quaid) homosexuality by having another dinner party, and taking him for some therapy.

Liam Neeson also plays the truth of his David perfectly. He is the aging professor who does selfishly flirt with younger women, more than he should. Neeson’s control and restraint in his acting here is essential for the final twist of plot around his relationship with Chloe, and her evil agenda.

Neeson’s final scenes remind me of Pagliacci, the clown, who in Leoncavallo’s opera sings the tragically beautiful Vesti la giubba. The clown, broken hearted, sings this aria which translates: ‘Perform…put on the costumes.’

Whether you see the tears of the clown doesn’t matter. Neeson is David dealing with the evils of Chloe which foment the final climax.

Chloe’s duplicity revealed is the final climax of this movie. Amanda Seyfried’s characterization helps bring it to us subtly, and carefully. Chloe is a psychopath where the lives of Catherine and David and their son finally intersect. Seyfried, the young talent, matches the wisdom of Neeson, Moore, and Egoyan in bringing audiences to this film’s unexpected climax.

Also see: The cast and crew of Chloe.

Glen Russell lives on Vancouver Island and is a freelance writer and occasional contributor to Northernstars.ca

This review is © 2009 by Northernstars. Click here for more about copyright.