Of Christmas Movies Past & Present
by Jim Slotek

(December 15, 2020 – Toronto, ON) The Canadian co-production The Man Who Invented Christmas is a highly recommended, witty and touching family film, a fable-within-a-fable about how Dickens (Dan Stevens) came to imagine A Christmas Carol and Scrooge (Christopher Plummer), pictured above.

But with winter as one of our main selling points, why was it shot in a studio in England?

It’s worth noting that Charles Dickens’ tale was influenced by the same phenomenon that makes our winter backdrop increasingly unreliable – climate change.

The “white Christmas” that blesses everyone on Christmas Day was pretty much a thing of the past when the story was written. But Dickens’ childhood, which informs the narrative, happened at the tail end of what climatologists call the “Little Ice Age” that cooled Europe. He grew up with snowy winters (where today, an inch of snow can paralyze the U.K.).

This is the first time Plummer has played Scrooge in his career. And I was on the set the one time he played Santa, in the 2002 Canadian film Blizzard (in which one of Santa’s elves – voiced by Whoopi Goldberg 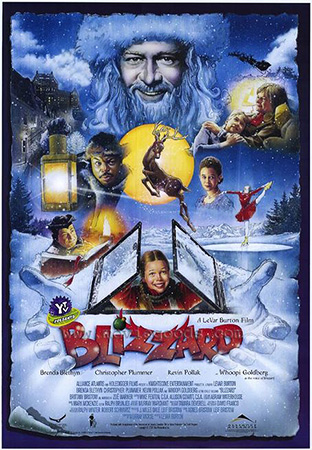 – breaks the rules to help a sad little girl with a dream of becoming a figure skater.

It was minus-5C, on the old-timey skating rink in Pickering, Ontario, and my numbing toes attested to the fact that I was definitely wearing the wrong shoes.

And it was starting to snow. Too little too late for the production, which had “suffered” through 14 degree days in mid-December that had turned the skating rink into water by mid-day every day.

On this day, as they had from the beginning, the crew hosed down the trees with a soap-based foam and covered buildings with white cotton batting. I notice that some of the flakes on my jacket were real and melting, others were sudsy.

The next year, I got a much more dramatic on-set taste of can-do fake-winter, with, of all things, a Christmas movie that was shot in Toronto in August in the midst of a sweltering 33 degree C heat wave.
It was a CBS TV movie called The Man Who Saved Christmas – not to be confused with The Man Who Invented Christmas – the real-life story of Erector Set inventor A.C. Gilbert (Seinfeld’s Jason Alexander) who defied his father, his soldier son, the U.S. Army and Congress to keep producing toys for children during the First World War rather than turn his company into a munitions factory.

How do you make fried-eggs-on-the-sidewalk weather look like winter? Ironically, the look was masterminded by Icelandic-born Canadian director Sturla Gunnarsson. “Snowbanks” of, yes, cotton batting were strewn all over the sidewalks, with carefully hidden hoses trickling away to make it look like it was melting.

And speaking of melting, Alexander’s sweat had to be mopped frequently as he shot scene-after-scene in about a 30-pound overcoat, just slightly less thermal than the Gortex parka George Costanza wore in that Seinfeld episode.

Which is not to say that Canadian winters are never obliging. The 2009 film Whiteout saw Kate Beckinsale play a detective trying to solve a murder at a research station in Antarctica. The stand-in for the bottom of the world: the frozen shores of Lake Manitoba, a two-hour drive north of Winnipeg. Temperatures of minus-30 C and colder left Beckinsale, “unable to speak at all for a while, because my whole throat closed on that first breath.”

The crew were also given cold-weather literature which warned it was just as easy to be overcome by heat as by frostbite, given the heat-retaining qualities of their polar gear, “especially if we went inside and didn’t take our coats off.”

And she discovered the joy of frozen breath moisture. “I showed up and all the men had beards full of ice that I thought had been applied by the makeup department. I was wrong. I discovered my hair had an unfortunate tendency to freeze into a point.”

Sometimes the Canadian winter has actually informed the look of a movie, like Hal Ashby’s The Last Detail (1973), which was shot in Toronto and starred Jack Nicholson and Randy Quaid as a pair of Navy officers who had to escort a convicted sailor (Otis Young) to his inevitable incarceration.

The movie was the debut of legendary cinematographer Michael Chapman (Taxi Driver, Raging Bull). In an interview on the YouTube channel Web of Stories – Life Stories Of Remarkable People he remembered the temperature more than anything else. “It was very, very cold and awful. We all had warm clothes on, but the poor actors, they had to wear peacoats and simple black shoes like they wore in the Navy. And they were just dying in the cold, just dying. (Young) was so cold that his skin became kind of grey. It was very strange to see.”

The cold gave a starkness to the sailors and their grim assignment, a backdrop for the cynical humour Ashby hoped to capture from the novel by Darryl Ponicsan.

It was one of Canada’s most chilly close-ups. And if global warming lives up to its billing, it may just be a snapshot of how it used to be.

This article was originally published on December 11, 2017. Jim Slotek is a longtime Toronto Sun columnist, movie critic, TV critic and comedy beat reporter who has interviewed thousands of celebrities. He’s been a scriptwriter for the NHL Awards, Gemini Awards and documentaries, and was nominated for a Gemini Award for comedy writing on a special. His writing also appears in Cineplex, Movie Entertainment magazines and in the blog Original-Cin.