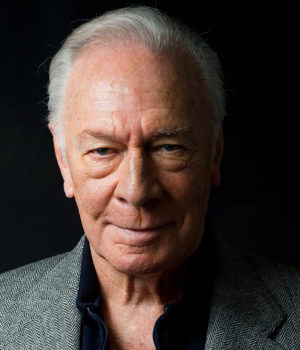 (January 10, 2017 – Toronto, ON) The Academy of Canadian Cinema & Television has announced that iconic actor Christopher Plummer will be honoured with a Lifetime Achievement Award at the 2017 Canadian Screen Awards. Born in Toronto in 1929, he came into this world when the stock market crash was less than a month old and his parents, no longer living together, were in the process of ending their marriage. Named Arthur Christopher Orme Plummer, his mother returned to Montreal, which was her hometown, when he was about one year old.

“Every year, the Academy has the honour of celebrating those who have made immense contributions to our cultural landscape through their artistry” said Academy Chair Martin Katz. “Christopher Plummer is one of the greatest actors of his generation who has delighted audiences with his iconic performances. We are elated to have him as this year’s distinct guest of honour.”

After working as a lighting designer for his high school production of A Midsummer Night’s Dream, Plummer became interested in acting. By his mid-teens, he had played leading roles in student productions and his first important role was that of D’Arcy in Pride and Punishment, a role he called “the first wonderful part I ever had to play.” He trained for the theatre with the Canadian Repertory Company in Ottawa and while there, in just two short years, he played 75 different roles.

“Christopher Plummer has had a long, versatile and brilliant career on stage and on screen. He is a true gentleman of the arts, exuding elegance and grace and we are proud to celebrate his legacy.” said Academy CEO Beth Janson.