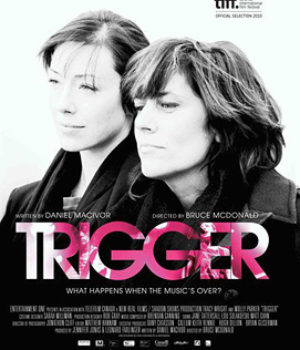 (October 4, 2010 – Toronto, Ontario) There are so many layers, fond references and back stories to Bruce McDonald’s latest film, Trigger, that it’s hard to know where to start. So let’s start with the obvious – it’s an 80-minute cinematic love poem to the late, great Tracy Wright.

Wright, for those who don’t know her, was primarily a Toronto stage actress with the occasional film role, usually in supporting parts. Her film résumé dates back to 1990 when she appeared in a bit role in McDonald’s debut feature, Roadkill. The long-time companion of Don McKellar (who wrote Roadkill), with a relationship that dated back to the early days of his theatrical career, Wright 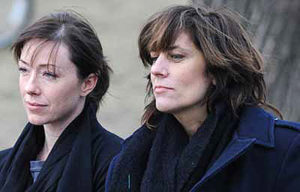 died earlier this year from pancreatic cancer at the age of 50. In a supremely romantic gesture, the couple married shortly after being given the news that the cancer was terminal.

Trigger was written by Daniel MacIvor at the request of McDonald to highlight Wright’s immense acting talents, but that was sometime before her cancer became known. McDonald came up with the idea of combining the static value of filming two people talking intelligently and passionately over dinner à la My Dinner with Andre with the hysterics of a punk band reunion à la Hard Core Logo, although this time the warring protagonists would be women. (Molly Parker stars as the other half of the punk duo that was known as Trigger.) Part of this back story is that when McDonald was searching around for writers for Roadkill, he was impressed by the work of MacIvor but ended up hiring McKellar, mistaking the two “Mcs.” He once told me in an interview that he always wanted to make it up to MacIvor for the mix-up, the result some 20 years later being Trigger.

The script was in development for some time, but production became an urgent matter when it became known that one of their lead actresses only had a short time to live. McDonald reached out to old friends to help put the financial package together on short notice, and Callum Keith Rennie and Hugh Dillon, the original punk rockers from Hard Core Logo, stepped up to add their weight to the project and share credits as executive producers. Rennie appears briefly in the film as a music PR hustler; however, Dillon could not due to his commitments to Flashpoint. Other acting notaries to take cameo roles include Sarah Polley, who appears as the stage manager for the benefit concert reuniting Trigger after a long absence from the limelight. Don McKellar appears in the same bathrobe he wore in Twitch City as Wright’s live-in boyfriend, Julian Richings (who played the reclusive Bucky Haight in Hard Core Logo) shows up as a pompous after-concert guest and director Allan Zweig has a small part as a helpful cabbie.

The movie is structured around three lengthy conversations between Wright and Parker. Parker plays Kat, who has moved to L.A. and is now composing “theme music” for the Lifetime channel. Wright is Vic, a bitter ex-junkie who is trying for a low-key comeback with a solo career. They meet in an upscale restaurant at Kat’s request to test the waters before the benefit for “Women Who Rock,” headlining the reunion of Trigger. It’s evident from the moment Kat walks in 45 minutes late that there is a lot of baggage to be unpacked. Both are recovering addicts – Kat, whose poison was alcohol; Vic’s was heroin – and they spar with not-so-carefully concealed insults. Kat is more restrained because she wants Vic at the reunion; Vic is reluctant because she has left the scene behind and retreated into a pursuit of spirituality.

This is the My Dinner with Andre portion of the movie, and the scene plays out for nearly 20 minutes. Vic needs convincing and Kat is persuasive. In the one stylish flourish this low-budget film has to offer, Vic excuses herself for a trip to the bathroom. Kat, alone at the table, reaches for a glass of whiskey from a passing waiter, downs it in one gulp and literally breathes fire. She then turns to a table full of young businessmen and engages them in group sex; meanwhile, Vic is frantically shooting up in the washroom. It’s a fantasy flashback that soon passes, but it’s a nice touch and one wishes McDonald had a bigger budget for more of the same.

Dinner over, they go back to Vic’s apartment for a quick change into proper rock-girl attire (which is where McKellar has his cameo, munching on a bowl of cereal and writing a tell-all memoir on his battered typewriter) and head off for the benefit – Vic still reluctant; Kat still persuasive. Once there, Kat

takes to the stage and Vic, despite her reservations, joins her and the two kick up a storm to an adoring group of young fans. It must be said that both Wright and Parker have their punk licks down pat and come off as super-cooler rockers.

After the concert, they walk some more and break into the conservatory in Allan Gardens. It’s here that the second conversation takes place, although this time it’s more of a monologue by Vic. In a remarkable long take with no cuts, she pours her heart out. It’s revealed the band broke up when she stormed off the stage one night and headed for Paris with her junkie boyfriend. There she found love and pain in equal measure, only to discover that neither satisfied her spiritual longing. She eventually broke free and returned to Toronto. It’s in this heartfelt scene that MacIvor’s ability to dig deep into “the dark night of the soul” reveals itself most fully and it’s the highlight of the film.

On the move again, they cab it out to a suburban high school rented for an after-concert bash. Here it’s revealed that Kat paid for and organized the whole event as a means of reconnecting with Vic. Vic is horrified by the deception and storms off once again with Kat in hot pursuit. They chase through the hallways and end up tussling on the gym stage, a couple of middle-aged rockers acting like high school brats. Coming to their senses, there is one final conversation back in Allan Gardens, at dawn, where the two achieve a kind of peace.

Trigger is simple enough in its conception, but profoundly affecting because of the superior quality of the script, the excellence of the performances, and the stripped-down, unsentimental approach adopted by McDonald. It’s by far his most mature film to date, and a loving tribute to an actress who was tragically cut down in her prime.

This article was written for Northernstars by then Contributing Editor Wyndham Wise and is Copyright © 2010 by Northernstars.ca. For more information about copyright, click here.

In Search of the Lost Father

In the Realm of Mystery and Wonder