Post 9/11 paranoia by way of Rear Window, Jeff Renfroe’s Civic Duty works up to a point as a low-budget thriller then falls victim to hysterical psychodrama. Terry, a white, middle-class, seemingly well-educated guy (played by Six Feet Under’s Peter Krause, who also had a hand in the production), gets fired from his job as an accountant the same day a “Middle-Eastern looking” guy (Khaled Abol Naga) moves in downstairs from his apartment that he shares with his pretty wife, Marla (Kari Matchett). The planes have just hit the World Trade Centre, and George W. is all over the airwaves, warning the citizenry to be vigilant.

Now confined to his apartment with too much time on his hands, Terry surreptitiously begins to notice strange goings on in the courtyard, and the fact that the guy checks out his wife`s ass as she comes and goes. Marla, on the other hand, does what any good neighbour would do, pays a visit to offer a friendly hello and introduces herself. She returns to Terry to announce that their new neighbour, Gabe Hassan, is a foreign student and quietly charming.

The tension builds for about an hour as Terry and Gabe play a game of cat and mouse. There are more visits by strangers, garbage is being dumped in the middle of the night, and Terry even trails Gabe one day to an ATM, where he acts suspiciously. Unnerved by all this activity, Terry breaks into Gabe`s apartment while he is out, and ends up in the closet when Gabe makes a sudden return. Terry increasing becomes convinced, over his wife’s sensible 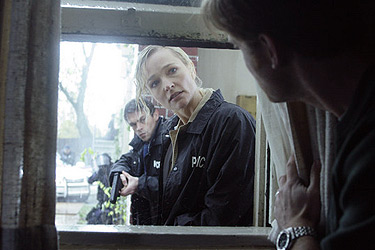 objections, that they are living above a terrorist cell. He calls in the FBI (Richard Schiff from The West Wing), who also tells him, sensibly, to mind his own business and let the agency handle matters.

Then things go seriously off track as Terry bursts into Gabe`s apartment waving a gun and ties him to a chair while he looks for evidence of a plot. The local police show up, thinking they have a hostage situation on their hands, so does the FBI agent. There`s a lot of yelling and screaming between Terry and Gabe about who has committed the greater evil, American imperialists or Islamic Jihadists, which goes on way too long and the end result is disappointing.

Civic Duty, a Canada/US/UK co-production, has all the hallmarks of a direct-to-DVD release. It looks grainy, like it was shot on digital video, and because Krause is in virtually every scene it has the air of a vanity project. He does okay as a man who slowly becomes unhinged, and reveals a spooky side to the bland, white-guy image reminiscent of Michael Douglas`s character in Falling Down, but he lacks proper motivation. And director/editor Renfroe, who likes to emphasis Terry`s mental state with lots of close-ups, cut-ins, fuzzy camera work and bleary fades that are supposed to indicate the character’s inner turmoil in the first-person singular, does not help matters. The technique is overused and annoying, and the film is ultimately forgettable.

Wyndham Wise was a contributing editor at Northernstars.ca when he wrote this review. Photo and poster courtesy of Christal Films. Used with permission.