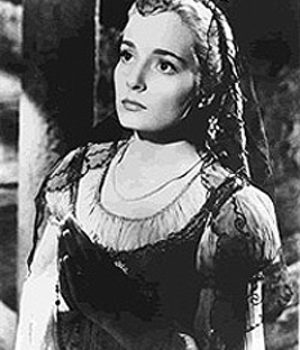 Suzanne Cloutier burst upon the world stage as a model in New York City. She was known at first as a wide-eyed beauty with flawless, chiseled features. Shortly after her career began, she was approached by Hollywood director George Stevens. His company, Liberty Films, offered her a role in what was then called a “women`s picture” and is now known as a “chick-flick.” It was 1946, and her debut film was Temptation. Although it was a small role, her acting career had begun at 19-years-old. The following year she moved to the stage when she joined Charles Laughton`s company for one season in New York and then moved to the Jean Daste Comedie Française Touring Company in Paris. The rest of her life would be an almost constant back and forth between the stage and film.

In fact, one of the roles she is usually remembered for is the film of a Shakespeare play. After starring in Julien Duvivier`s Au Royanume des cieux in 1947 and Marcel Carne`s Juliette ou la clef des songes in 1950, Cloutier was cast by Orson Welles to play Desdemona in his film version of Othello. She was, in fact, the 11th actress he had 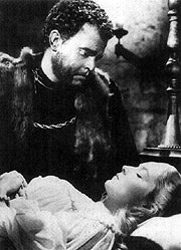 auditioned for the role. Always pressed for money, Welles made the film in a madcap stop-and-go fashion between 1948 and 1952. Critics have called it “one of the screens sublime achievements” and “a masterwork in the finest sense.” It went on to be co-winner of the Palme d’Or at the 1952 Cannes Film Festival. It was only released briefly in the United States in 1955. The Welles estate thought that the original nitrate negative had been destroyed, but then, almost by accident, it was found at the 20th Century Fox warehouse in Ogdensburg, New Jersey, still in the original steel containers. It was recently fully restored. In it we see Suzanne Cloutier in a finely honed performance that is simple, straight forward, yet suggesting the beauty and poignant sweetness of the Moor`s innocent bride. While a lot of her scenes were cut, she dominates the screen where she does appear and stands her ground next to the legendary Welles. Having made a film of a play, Welles and Cloutier would also work together on the Paris stage in his play The Unthinking Lobster. Later she became involved in helping to put together financing for his film projects The Other Side of the Wind in 1972, and his never-completed Don Quixote.

Other films in the 1950s include Derby Day,in 1951, and Doctor in the House, released in 1954. But by then she had shifted back to stage work. In 1953, she appeared opposite Peter Ustinov on the London production of No Sign of the Dove. During their time together, they fell in love and she married the actor/director/ playwright a year later. The marriage remained strong for years, and they worked together again with Cloutier starring opposite him on stage in the 1961 version of his hit comedy Romanoff and Juliet. But they went their separate ways in 1971, and she remained busy raising their three children. While she did not quite turn her back on acting, her appearances on stage or in film dwindled over the next two decades. In fact, her last film was a rare cameo as a sidewalk passerby in 1997`s Whiskers starring fellow Canadian Brent Carver.

Although no longer working as an actor, she remained busy as an artistic advisor to various film festivals in addition to producing two musical documentary films.

Suzanne Cloutieer returned to Canada in 1988 and lived in Montreal until her death from liver cancer.

This biography is Copyright © 2003 by Ralph Lucas and may not be reproduced without prior written permission. For more information about copyright, click here.