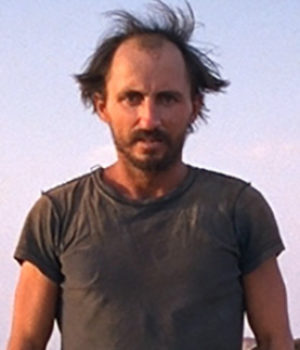 Life Without Frank
By Melanie Scott

The Sahara desert occupies most of the northern continent of Africa. It’s eight–and–a–half–million square kilometres in area, and stretches from Mauritania on the Atlantic coast, through Mali, Niger and Chad, and ends at the Red Sea in Sudan. It’s arid, bleak and unforgiving. Outbreaks of civil war between various desert tribes spring up continuously along the entire route. The carcasses of the desert’s victims – camels, goats and scorpions – litter its vast expanse, having succumbed to the heat or the lack of water or the violence of its storms. What, then, would possess someone to traverse this hell on earth – alone?

In the case of the late Ottawa filmmaker Frank Cole, equally obsessive passions for love of life and fear of death were reasons enough. In 1989, following the death of his grandfather, Cole set out to cross the Sahara. He carried with him water bottles, preventive medication, his grandfather’s ashes and a Bolex camera equipped with a timer. Over the course of a year–long journey, he recorded in meticulous detail the adventure that would earn him a place in the Guinness Book of World Records. The journey would also earn him a unique position in the world of film. Life without Death, the 90–minute documentary that Cole created over the ensuing 10 years, is a haunting, brilliant and bittersweet homage to the pursuit of eternity.

Cole got his first taste of the desert as a young boy, when his father, a diplomat with the Canadian government, was posted to North Africa. His reaction to this encounter lasted throughout his life. Cole equated the barren landscape with a battleground on which one could fight – and beat – death. His first film, The Mountenays, a quirky documentary about modern–day hillbillies eking out a living in the woods, appears to have no connection to the place that would become the very foundation of his body of work. His second film, A Documentary, is a painstaking visual record of the death of his grandmother. It is in this work that one glimpses Cole’s later obsessions. A third film, A Life, has some of the qualities that would serve to make Life without Death the brilliant work that it is. Cole went back to the desert and travelled parts of it by car with a companion; on his return, he took the various pieces of footage that had been recorded, intertwining it with footage shot in Ottawa. The film is without sound – no dialogue, no music – save for the noises of the desert itself, the pounding of a shoe on the sand, the wind and the stillness of the night. At the film’s premiere at the National Archives in Ottawa, Cole participated in a Q&A after the screening. A man in the audience stood up and declared: “I believe I have seen a work of pure genius.”

Cole then embarked on the first part of his next desert sojourn. With enviable focus, he removed himself from the fray of the every day. He spent his days in preparation for the gruelling trek from the Atlantic coast at Nema, Mauritania, to the coast of the Red Sea in Sudan. Consumed with the belief that death is a temporary cancer that can be treated, he built up his body and soul with, respectively, exercise, vitamins, a strict diet and solitude. As he states in the opening sequences of Life without Death, “I forced myself to become a recluse, to become a person so alone that I could never be crushed by loneliness.”

I had met Cole in the days following his graduation from the film program at Algonquin College. Out of all the emerging filmmakers who were paving their way to the world of celluloid, Cole was, it seemed, the one – perhaps the only one – who grasped the medium fully. As his classmates went off to wait on tables and drive taxis, Cole began an exploration of his inner self that was so pure and so honest that others could only look on in awe. While developing as a filmmaker, he was also developing an interest in some of the things that would later see him labelled an eccentric: an obsessively low–fat diet; an existence devoid of “things” (his sparse apartment in a nondescript high rise in southeast Ottawa was empty, save for his barbells and the necessities of sleep and cooking); and, above all, cryogenics, that nebulous area from whence the stuff of science fiction is born. Many an argument would begin and end with the cryogenics thing. “But Frank, if everyone lives forever, where are they all going to live?” His response: “There’s lot’s of space between here and Toronto.”

He lived as he filmed as he lived; nothing was ever half way. When a swim in the Gatineau River just north of Ottawa is proposed, Cole counters with a suggestion that the swim should be across the river. During a shopping expedition, he implies that his companion doesn’t need the one or two practical purchases she is proposing, but needs, in fact, a whole new wardrobe. Cole’s companion of many years, Sonia Hersig, reflects that Cole would frown upon what she was eating at any given time, especially if it contained even a trace of fat. Fellow filmmaker and friend Dan Sokolowski sums him up thusly: “He was obsessed with life.”

The first trip to the desert with his family, and the second with a companion to record the footage that would become A Life, had merely whet his appetite. He knew that, in order to understand the death of his grandfather on his own very individual terms – and, hence, the meaning of death itself – he would need to embark on a journey fraught with danger and fear. He explained to Sokolowski: “The desert is the place I feel most alive.” His terror of death was his fuel for life.

On November 29, 1989, he set off from Nema with the first of eight camels that would accompany him through the following year. Simply remaining alive against the odds the desert presented would have been enough for anyone. Filming the trek brought the journey to a completely different level. And the final creation, the film that has been screened and discussed and analyzed in the two years since it was finally released, raised the bar on what can be accomplished by one determined, gifted man.

The film’s haunting imagery – a camel’s head against a night sky flashing with lightning; the arrival of the police in the darkness (they have been tracking Cole, determined to force him to stop the madness); the relentless, blistering sun, all intertwined with images of Cole’s dying grandfather – is the culmination of the creation of a splendid painting made with moving pictures. Tom McSorley, director of the Canadian Film Institute (CFI) and a contributing editor to Take One, believes Cole “was like a landscape painter.” When the film was screened on TVOntario’s The View from Here, host Ian Brown described it as a “truly rare thing, a documentary that grabs you by the throat and doesn’t let go, even when it ends many months and thousands of miles later.” 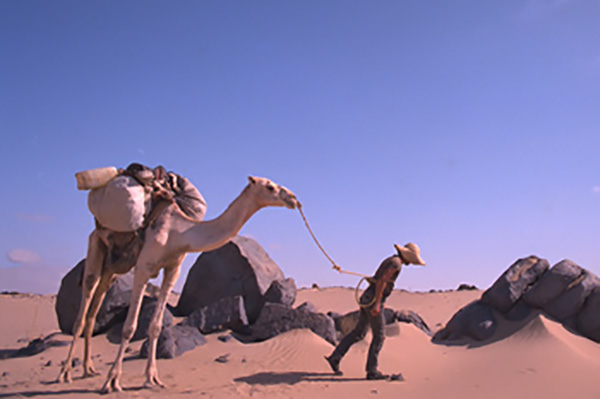 Over the course of the passage, Cole learns a lot about himself, and we learn along with him, voyeurs to his agony, his cracked skin, the sickness induced by contaminated water, and, above all, his thirst. At one point Cole realizes, “If water was all there was in my life, it would be enough.” At times, the biggest fear that haunts him – dying in his sleep at the hands of bandits – is

Cole’s determination and passion become abundantly clear as the film rolls. One of the first statements that Cole makes in the narration reflects his absolute belief in being able to beat the odds: “I strived to make myself a person the Sahara could not kill…a person whose outcome was life, not death.” Miquet, who did much of the editing on the film, also scored the music (Cole, we had both noticed, didn’t own a record, let alone a machine on which to play it). The music makes references to the various cultures that Cole encounters along the way. The narration, completed during the editing process, is revealing and witty and very, very Cole. His voice is monotone and, apparently, without emotion. But the images of Cole (he appears in at least 95 per cent of the footage) are so riveting that it is impossible to look away from the screen. Although Cole forced himself to become something of an urban hermit in order to undertake his journey, he is completely at ease in front of the camera. Being in focus, in front of an audience, provided him with fuel, as did fear. Miquet reflects that “he loved to see himself on screen.”

His life and his work were so intertwined that the line between the two could have easily disappeared. Those with whom he shared his life – and there weren’t many – are unanimous in their agreement that Cole was his work. “You can’t talk about Frank,” says Sokolowski, “without talking about his film.” McSorley believes that “Frank found a metaphor for his interior self.” And Miquet says that, “His art was his blueprint for life. His film was the way he communicated with the world.”

A decade after his return from the Sahara, Life without Death started making the rounds. Cole, ever enigmatic, left his masterpiece in the hands of others and didn’t stick around to witness the public reaction to this extremely personal visual diary. He was back in the desert, launching another voyage. Why, after pouring himself into his life’s work, did he choose to abandon its public birth? Miquet says “He couldn’t live with the expectation of people asking him ‘What next?’ He wanted to stop. He thought he’d said everything he had to say.” Nevertheless, he took his camera with him when he returned to the Sahara.

In November of 2000, the CFI ran a retrospective of Cole’s work. Unbeknownst to McSorley, and most of the others who attended the screenings, Cole had become the victim of the land that possessed him, body and soul. He had been bludgeoned to death by bandits in Mali sometime during the month of October. It took four months to confirm that the body that was found was, in fact, Cole’s.

Some pop psychologists believe that our deepest desire is to achieve what we fear most. In Cole’s case, this would be an apt analysis. McSorley speculates that “maybe he was out there searching for death.” But the land that he loved – the barren dunes, the carcass–littered scrub, the heartless plateau that seems never ending – was his saviour and his enemy; his passion and his nemesis; his life and his death.

Had Frank Cole survived, none can predict what would have come next. Those who admire his work all state that Life without Death was the epitome of filmmaking, and it would have been difficult, if not impossible, to improve upon. None can imagine him making conventional films. It is, in the end, a matter of personal speculation. And there is only one constant, one point that need not be debated. He would have returned to the endless desert, again and again, in search of the elusive – eternity.

This article was originally published in Take One Magazine, Issue No. 37. Northernstars.ca acquired the digital archives of Take One in 2007.