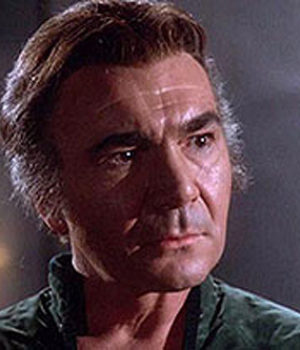 Equally at home on the classical stage and in the movies, John Colicos was a distinguished and versatile actor. Born in Toronto he grew up in Montreal where he made his acting debut playing Jesus in a Biblical pageant. In 1951, performing with the University Alumnae Dramatic Club in the George Bernard Shaw play In Good King Charles’ Golden Days, the young, 24 year old Colicos was given the best actor award in the Dominion Drama Festival.

He moved overseas and began acting at the Dublin Gate Theatre and later, when he was just 22 years old, he became the youngest actor to play King Lear at London`s famed Old Vic.

When he returned home he began attracting attention for his graceful acting style and charisma on live CBC television dramas. He joined the Stratford Festival and starred in the first-ever Stratford production of Timon of Athens. He also took over the lead in Cyrano de Bergerac after the role had been vacated by Christopher Plummer.

One of his most challenging roles came in 1964 when he again took on the role of King Lear, this time at Stratford. The play was directed by Michael Langham and co-starred Frances Hyland, Martha Henry and Bruno Gerussi. He was 36 but his performance brought wide critical acclaim. He shot to international fame with his startling impersonation of Winston Churchill in the play The Soldiers that played both London and New York and again brought outstanding notices.

His career on film was also filled with notable success, particularly in his supporting role as the unscrupulous Thomas Cromwell in the 1969 film version of Anne of a Thousand Days which starred Genevieve Bujold in the title role playing opposite Richard Burton. Later in his career in reached a new audience when he accepted the role of Count Baltar on the series Battlestar Galactica opposite CBC-TV alumnus, Lorne Greene. He also played the Klingon Commander Kor on Star Trek.

John Colicos was 71 when he died after a series of heart attacks. Some months after his passing there was a memorial service held in Stratford, Ontario organized by his family, sons Nicholas and Edmund and his wife Mona.

This mini-biography is Copyright © 2013 by Northernstars.ca and may not be used without prior written consent. For more information about Copyright, click here.