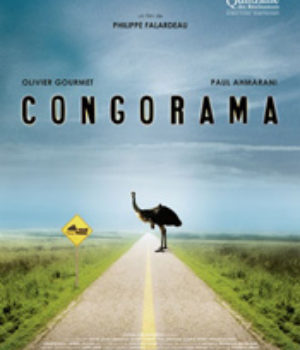 Blood diamonds. Emission-free electric cars. Expo 67. The civil war in the Democratic Republic of Congo. Emu farming in rural Quebec. You might very well wonder what these things have in common. In Congorama, all the dots are connected by the fertile mind of Philippe Falardeau, the writer and director of this gentle “dramedy” about two men in search of their roots.

Michel, a frustrated, underachieving Belgian engineer and part-time inventor (Olivier Gourmet, the great Belgian actor from the award-winning films of the Dardenne brothers), who is married to a Congolese woman (Claudia Tagbo), learns at the age of 41 from his famous but now wheelchair-bound father (the veteran French actor Jean-Pierre Cassel) that he was actually adopted. He was born secretly in a barn in Quebec near the village of Sainte-Cécile to a teenage mother.

On the pretext of a business trip to sell a de-icing device that he has invented, Michel travels to Quebec in search of his biological parents. In Sainte-Cécile he meets a helpful priest (Gabriel Arcand) who knows the history of the parish and 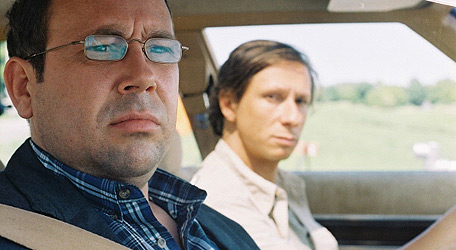 steers Michel in direction of Louis, the son of a local inventor, who happens to be searching for his father`s lost plans for a revolutionary diesel-electric hybrid car. The destinies of Michel and Louis come together in a series of coincidences and twists of fate worthy of the novelist Charles Dickens, providing the context for the blood diamonds, the war in the Congo, Expo 67 and the wandering Emu.

Congorama, a Canada/France/Belgium co-production, was the big winner at this year`s Le Prix Jutra (the Quebec film awards), and now is in limited release in the rest of Canada. Crafted with great skill and a touch of surreal humour by Falardeau and André Turpin, his first-rate cinematographer, it`s an impressive low-key Chinese puzzle of a movie that explores the past and the present as the two leads search for their identity and self-worth. The plot structure is divided into two parts. It begins with Michel’s story, and we follow him on his quest to Québec, but when he meets Louis and they have their encounter with the Emu, it switches abruptly to Louis`s story and the path he takes to his encounter with Michel and the aforementioned bird. It becomes apparent that these two have much more in common than a simple twist of fate, and the film concludes two years later when their paths cross again in Belgium.

Philippe Falardeau was responsible for the much-admired social comedy La Moitié gauche du frigo in 2000, which won all sorts of awards, including the Claude Jutra Award for Best First Feature at the Genies. With his sophomoric feature he has come up with a wholly original film set within Québec’s rural heartland that reaffirms that province`s superiority when it comes to making thoughtful, personal cinema. Granted, it is over-plotted and claustrophobic, and it certainly doesn’t have broad audience appeal, but Congorama is one clever film and deserves to be seen.

This review was written for Northernstars.ca by Wyndham Wise and is Copyright © 2006 by Northernstars.ca. It may not be reproduced without written permission. For more information about copyright, click here.

In Search of the Lost Father