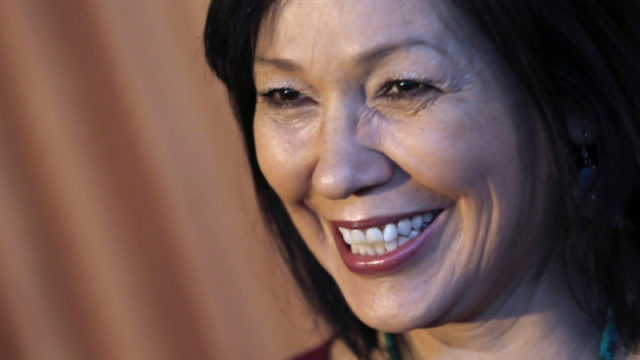 (October 2, 2017 – Toronto, ON) The imagineNATIVE Film + Media Arts Festival, which runs October 18-to-22 unveiled their full line-up today along with announcing that Cree actor, humanitarian and activist Tina Keeper (pictured above) will receive the 2017 August Schellenberg Award of Excellence.

This annual award recognizes significant professional and personal achievement by an Indigenous actor, of any gender, from Turtle Island (North America). Tina Keeper will receive her award when the imagineNATIVE Film + Media Arts Festival holds its Awards Presentation on Sunday, October 22 at the TIFF Bell Lightbox.

Born in Winnipeg, Manitoba, Tina Keeper is a member of the Norway House Cree Nation and remains involved in producing public education initiatives to build bridges between Indigenous and non-Indigenous people in Manitoba. An active member of Canada’s film and television industry for over thirty years, Keeper is well-known for role as RCMP officer Michelle Kenidi on the hit CBC series North of 60.

From 2006 to 2008, she was a Member of Parliament representing Manitoba’s Churchill riding for the Liberal Party of Canada, and went on to serve as the Official Opposition’s Critic for Public Health and Canadian Heritage.

The August Schellenberg Award of Excellence was launched in partnership with Joan Karasevich Schellenberg to honour her late husband, actor August (Augie) Schellenberg, and the spirit of his work. This annual award is presented to gifted Indigenous actors based on the longevity and impact of their careers, as well as their professionalism and involvement in mentorship and community work. The Augie was first bestowed in 2015 to Tantoo Cardinal, and to Tom Jackson in 2016. The Augie is sponsored by ACTRA National, the ACTRA Performers’ Rights Society, and through individual donations. Click here to donate to the August Schellenberg Award of Excellence.

President of Kistikan Pictures (a partner company of Buffalo Gal Pictures), earlier this year, Keepr was honoured by ACTRA when she was named the 2017 ACTRA National Woman of the Year.


This year marks the 18th annual festival, with over 100 feature films, documentaries, shorts, and music videos created by Indigenous filmmakers on the schedule. While that is in itself a remarkable number, while the film industry in general strives to be more inclusive, the imagineNATIVE festival will have almost three quarters of its selections (72%) made by Indigenous female directors.

As previously announced imagineNATIVE’s opening night gala on Wednesday, October 18 will be Waru at the Hot Docs Ted Rogers Cinema. The film, directed by eight Māori women, tells the story of Waru, a young boy who dies at the hands of his caregiver. Directors Chelsea Cohen, Ainsley Gardiner, Briar Grace-Smith, Paula Jones, Casey Kaa, Renae Maihi, Awanui Simich-Pene and Katie Wolfe, each tackle a ten-minute segment of Waru to create one complete, remarkable story through the lens of multiple family and community members as they deal with the horrific loss. Waru will be preceded by the short film Holy Angels, directed by Jay Cardinal Villeneuve, a redemptive and ingeniously crafted documentary sharing the testimony of Elder Lena Wandering Spirit’s time at residential school.


On Sunday, October 22, the closing night gala will be The Road Forward, a musical documentary by Métis/Dene award-winning filmmaker, Marie Clements at the TIFF Bell Lightbox. Connecting the beginnings of Indigenous nationalism on West Coast – a pivotal moment in Canada’s civil rights history – with the powerful momentum of First Nations activism today, The Road Forward’s stunningly shot musical sequences, performed by an ensemble of some of Canada’s finest vocalists and musicians, seamlessly connects past and present with soaring vocals, blues, rock, and traditional beats. The Road Forward is a rousing tribute to those who fought for First Nations rights, a soul-resounding historical experience, and a visceral call to action.

imagineNATIVE, the world’s largest presenter of Indigenous screen content, will also present Our People Will Be Healed, the 50th documentary in 50 years from revered filmmaker, Alanis Obomsawin. Like her last four films the topic is children’s rights. The feature documentary focuses on the Cree community of Norway House, Manitoba, and their innovative approach to educating First Nations students.

Earlier today at a media event in downtown Toronto, organizers announced the full programming schedule along with details of their our digital media and audio selections and exhibitions.

Tickets and passes are now available and there is more information available online.

Corner Gas: The Movie. Coming Soon. Maybe to a Theatre Near...