Wendy Crewson wanted to be an actress from the time she was just a little girl. Her dad’s business caused the family to move quite a bit, he sold farm equipment, but whenever there was an opportunity, she appeared in school plays. After graduating from high school in Pointe Claire, on the west island of Montréal, Crewson went to John Abbott College to study theatre arts. She received a Bachelor of Arts degree from Queens University in Kingston, Ontario, and she won the prestigious Lorne Greene Award for outstanding work in the theatre. She then moved to London, England, to study at the Webber Douglas Academy of Dramatic Arts, and she appeared on stage at the American Rep Theatre in London.

She returned to Canada for a vacation with every intention of returning to England when she auditioned for and secured a part in the CBC-TV drama The War Brides (1980), and received an ACTRA Award nomination for her work. Then came the series Home Fires (1980–84). Crewson played Terry Lowe, a young woman who marries a soldier who is killed in the Dieppe raid, works at an aircraft factory, and falls for a war correspondent, played by Booth Savage. This time she won the ACTRA Award for Best Actress for her performance. She had a continuing role in the crime drama Night Heat in 1985, and Crewson also appeared in Street Legal and Adderly. In 1987 came the American series Hard Copy on CBS, which is where she met her future husband, the actor Michael Murphy, and the short-lived series Studio 5-B for ABC in 1989.

Crewson considers 1991’s The Doctor with William Hurt her first real movie, but technically it was a $90,000 feature called Whodunit?, produced in 1986 by a first-timer named Christina Jennings and shot on an island in the Muskokas. They became close friends and later collaborated on the Gail Bowen mystery movies in the early 2000s. Jennings was the producer on the series ReGenesis, which Crewson joined in 2006. She had a small part in Robert Altman’s Tanner ’88, made for HBO, a series that starred Murphy as a fictional presidential candidate set in the 1988 New Hampshire primaries. Crewson and Murphy were married in 1988, and called New York their home. Later they would move to San Francisco with their two children, and in 2001 they landed back in Toronto permanently.

She appeared in dozens of Canadian made-for-television movies in the 1980s; however, the one that stands out is Getting Married in Buffalo Jump (1990), where she played Sophie Ware, a young woman who moves back to her family ranch in Alberta after pursuing a music career in Toronto. She hires a local farm hand, played by Paul Gross, and sparks fly. Suddenly she was a hot property and Hollywood came calling.

Crewson moved on to such big-screen fare as The Doctor (1991) with Hurt, Folks! with Tom Selleck (1992), directed by Canadian expat Ted Kotcheff, The Good Son (1993), in which she played the mother of a murderous Macaulay Culkin, Corina, Corina (1994) with Whoopi Goldberg and Ray Liotta, The Santa Clause (1994) as Tim Allen’s long-suffering wife (and the two sequels to that very successful franchise), To Gillian on Her 37th Birthday (1996) as Peter Gallagher’s girlfriend, Air Force One (1997) as the First Lady opposite ‘President’ Harrison Ford, Gang Related (1997) with Tupac Shakur and James Belushi, as a street savvy prosecutor, Bicentennial Man (1999) with Robin Williams, The Sixth Day (2000) with Arnold Schwarzenegger, What Lives Beneath (2000), again with Ford, and The Clearing (2004) with Robert Redford.

Tired of being type cast as the anxious wife/mother to major Hollywood stars, she returned to Canadian film and television where she has become a hard-working mainstay, dubbed by Playback magazine in 2003 as “Canada’s M-O-W Queen.” She received a Gemini Award nomination for I’ll Never Get to Heaven (1992), where she played an Irish Catholic mother who faces a challenge to her faith in Hamilton, Ontario, in the early sixties, starred in The Lives of Girls and Women (1994), based on the short stories of Alice Munro, and secured a 1998 Gemini Award for Best Performance in a Guest Role in the series Due South. She also had a part in the American

mini-series From Earth to the Moon (1998), directed by Sally Field and produced by Tom Hanks, about the stoic heroism of astronaut’s wives.

In early 1999, Crewson played the role of murder suspect/grieving widow Theresa Small in Sleeping Dogs Lie, and won a Gemini Award in 1999 for her searing performance in the right-to-die drama At the End of the Day: The Sue Rodriguez Story, in which she played a woman afflicted with ALS (Lou Gehrig’s disease) who valiantly struggles to die with dignity. That same year she appeared in director Anne Wheeler’s very popular lesbian comedy, Better than Chocolate.

Then came the role of Joanne Kilbourn – a single mom of three and an ex-cop who teaches criminology and solves crimes in her spare time – from Gail Bowen’s mysteries given the made-for-television treatment by producer Jennings. The films were Love and Murder and Deadly Appearances in 2000, and four in 2001, The Wandering Soul Murder, A Colder Kind of Death, Verdict in Blood and A Killing Spring, for which Crewson was nominated for another Gemini Award.

In 2002 she portrayed the no-nonsense Canadian war-crimes prosecutor Louise Arbour in the CTV movie Hunt for Justice: The Louise Arbour Story (pictured), Jane Doe in The Many Trials of One Jane Doe, for which she won a Gemini Award, and appeared in the 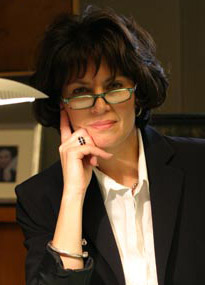 low-budget Canadian feature Perfect Pie. She had a recurring role in the 2003 season of the popular crime drama 24, then came Sex Traffic (2004; another Gemini nomination), and she won a Gemini in 2006 for her role in The Man Who Lost Himself, where she played Lorraine Evanshen, the wife of a CFL star who lost his memory after a car crash. In 2007, it was Margaret Atwood`s The Robber Bride.

Crewson appeared in Sarah Polley’s debut feature Away from Her (2007), based on an Alice Munro story, a part she characterized as “Nurse Ratched” (from One Flew over the Cuckoo’s Nest) who runs the nursing home. She has eight Gemini nominations to date, four of them wins, and she won a Gemini Humanitarian Award in 2002 for her charitable work for ALS. A passionate advocate for Canadian culture, Wendy Crewson has been outspoken in calling for more homegrown drama and television and increased exposure for Canadian films. She received ACTRA Toronto’s 2007 Award of Excellence in February and in 2013 she received an inaugural Canadian Screen Award for her work as Dr. Dana Kinny on the series Saving Hope and won again in 2017 for best performance by an actress in a featured supporting role in a dramatic program or series for her work in Superchannel’s Slasher series.

This biography is Copyright © 2007 by Northernstars Contributing Editor, Wyndham Wise and may not be reproduced without prior written consent. For more information about copyright, click here.