Home Directors Fun and Furor: An Interview with Ron Sanders 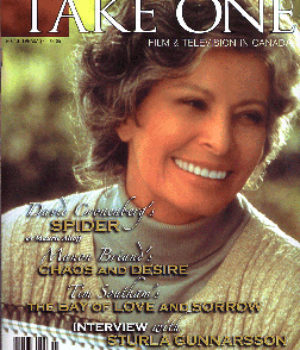 Fun and Furor: An Interview with Ron Sanders
by Kathleen Cummins

“Working on a Cronenberg picture is always fun, for one reason or another. I loved working on a picture like Crash because I knew it was going to be interesting, but I also knew it was going to piss a lot of people off. And it’s going to create furor. It’s much more fun to be involved with something like that, something that has some intellectual weight and does cause divisions of opinion. It’s fun to watch it happen.” – Ron Sanders

A long–time Cronenberg collaborator, Ron Sanders has edited 11 films for the master of psychosurreal thrillers. Three of them—Dead Ringers, Crash and eXistenZ—winning Genies for Sanders. His other Cronenberg credits include Naked Lunch, M. Butterfly, The Fly, The Dead Zone, Videodrome, Scanners and Fast Company. Other notable editing credits include such films as Yves Simoneau’s Perfectly Normal, Norman Jewison’s Dinner with Friends for HBO, Sturla Gunnarsson’s Joe Torre, Iain Paterson’s Hidden Agenda, as well as Patricia Rozema’s I’ve Heard the Mermaids Singing (as consulting editor). When he isn’t cutting a studio picture or a high–profile HBO special, Ron has often found time to lend his knowledge and skills in the cutting room to young emerging filmmakers, as well as mentoring some key names in the 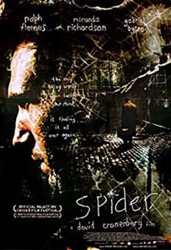 Canadian film industry, such as editors Susan Shipton and Susan Magee. I recently sat down with Ron to discuss Spider.

K.C. Can you describe the overall experience of cutting such an intensely interior film such as Spider?

A picture, if it has any life, changes from when you’re shooting it to when you’re cutting it. So you’re never quite sure where it’s going. The idea is, when the film has a life, you recognize it and allow it to go that way. Spider did develop a life of its own. That’s why it was relatively easy to cut. Editing is about making choices. Sometimes the choices are harder to make. But they weren’t difficult to make in this movie. We knew what we had to do. It was just there.

K.C. Could you describe your process for cutting Spider?

There was a slight difference in approach. We gave David two cuts, the usual script cut that we do, which was cut like it was shot, and then we did another version where we dropped scenes. Normally we don’t do that, but David had very little disagreement with what we did. David wasn’t in the cutting room very long. Certainly, we thought it could be cut many different ways. We didn’t impose much on it. It was very rigorous.

K.C. Could you elaborate on this process of restraint?

The first shot in the film is three minutes long, with no cuts, and we were very aware of that. We tried to make it shorter, but at a certain point—and the reason we knew the picture was finished—was that everything that we changed didn’t work. Our first reel is probably the slowest first reel you’ve ever seen.

K.C. You mentioned that editing is a process of making the right choices. What motivates your choices as an editor?

You have to channel the director when you’re working, and serve the director and the film. It really doesn’t matter whether it’s car crashes or schizophrenia, you go into it to cut it and serve the material. Find out what you’ve got and understand where you want it to go.

K.C. How do you do this? How do you serve the material, particularly such horrific and interior material as Spider?

Nothing is going to work if you don’t care about the characters. On some level you have to be afraid of them or love them or be fascinated by them, it doesn’t matter, but you have to be engaged on some level. You have to feel that way about Spider because you don’t know what he’s doing, but he doesn’t know what’s going on either. So you have to be with him, doing exactly what he’s doing. You don’t know until he knows. When you hold on Ralph’s face—and he’s in a memory and then you come back to him writing in his journal—you just hold on his face, it’s all there. You don’t need any more. You have an actor acting. And doing an extremely good job of it. Ambiguity is not something that happens in movies much anymore. There are so many cartoon movies, where things just blow up. I wouldn’t care if I never saw another movie where something blew up or, in fact, had a CIA agent in it, again!

This article was originally published in Issue No. 40 of Take One magazine. Northernstars.ca acquired the archives of Take One in 2007. It originally appeared as a sidebar to Stripped to the Bone: David Cronenberg’s Spider by Maurie Alioff.