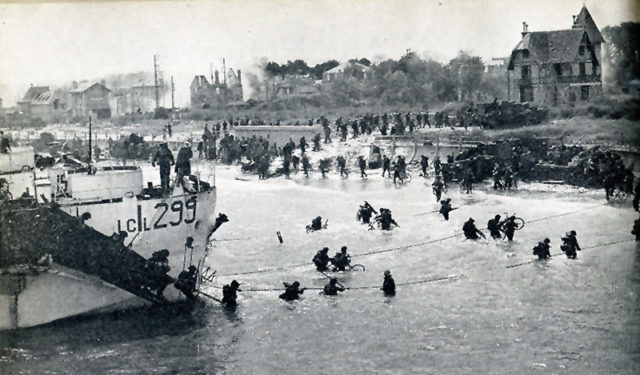 (June 6, 2019 – Toronto, ON) There is no doubt today will be marked by extended media coverage of the D-Day invasion of Europe, which took place exactly 75 years ago. Almost any mention of war ultimately generates thoughts of extreme nationalism, restrictions on personal freedoms, the crazed jingoism of usually physically weak men as well as various forms of privation and, of course, propaganda.

The Canadian government understood this last aspect clearly after the end of the The War to End All Wars when it seemed the world view of Canada’s contribution to the effort was filtered through the British press and almost totally ignored by the United States. The Exhibits and Publicity Bureau was created in 1919. This organization morphed into the Canadian Government Motion Picture Bureau, which itself became the foundation for the creation of the National Film Board (NFB) on May 2, 1939. While the outbreak of World War II was still a few months away, Germany had already annexed Austria in March of 1938 and had claimed part of Czechoslovakia known as the Sudetenland in September-October of the same year. It was a time of Wars and Rumours of Wars although if you ask anyone at the NFB if it was created because of the war, they will point to its twenty year history between the wars.

The first person to head the NFB, usually with the title of Canadian Government Film Commissioner was the Scottish-born John Grierson, who is credited with creating the word “documentary” in a review of a film in 1926 and is usually described as “the father of British and Canadian documentary film.”

In those early years, the NFB was very much a function of the government and operated under the National Film Act. It would not become independent until 1950 when the act was revised to separate the NFB from direct government control. But during those war years the NFB was responsible for two propaganda series, The World in Action and Canada Carries On. These short films, running between 10 and 20 minutes were distributed through Canadian and foreign theatre chains and ran as part of the pre-feature show along with newsreels and a cartoon.

The first in the Canada Carries On series, distributed by Columbia Pictures Canada, was a short titled Atlantic Patrol. Directed by British-born Stuart Legg, a disciple of Grierson who moved to Canada in 1939, it was narrated by Lorne Greene with music by Canadian composer Lucio Agostini. The turgid, ominous fanfare features pounding drums sounding like bombs falling and incorporates a few notes from the British and then Canadian National anthem, God Save the King. The tempo changes and the intensity softens so that Greene, who would become known as “the voice of doom” during the war, could begin to read the script over the visual of a churning sea: “The broad Atlantic, vital highway for man an munitions passing from the new world to the old.”

Released in April 1940, World War II had started just seven months before. Originally designed to last as long as the war might—no one knew how long it would be—the Canada Carries On series became so popular it was decided to keep it going well into the television era. It lasted 199 episodes and production was finally halted in 1959. The series was also produced in French titled En avant Canada and distributed in Quebec and New Brunswick by France Film. Some 8 to 12 issues were produced each year and it also continued until 1959 with a total of 173 episodes produced.

During the war years the NFB had experienced exponential growth. By war’s end in 1945 it had become one of the largest film studios in the world. Its staff of more than 780 had created more than 500 films in that time. In the post-war world downsizing was inevitable but the foundation of the NFB had been established as Canada’s national filmmaker. It’s first Academy Award came in 1941 for Stuart Legg’s Churchill’s Island, which was part of the Canada Carries On series. It was the first documentary to win an Oscar®.

Operation Overlord, the name of the action defined by D-Day began on June 6, 1944. Two days later the NFB released Zero Hour, a look at the preparations that had gone into the D-Day invasion. Today, as we should also celebrate the peace that came after the horror of World War Two, it may seem trivial to be writing about propaganda films, but it shouldn’t be forgotten that the war at home needed to be won. A population with fresh memories of World War One needed to sold that this war was worth the effort, worth the rationing, ultimately worth the loss of 45,000 Canadians killed in World War Two.

Canada’s population stood at about 11-million in 1939. More than one-tenth of the population, 1,159,000 Canadians and Newfoundlanders served in the various branches of the military during the conflict. Not included in that number are the men and women of the National Film Board who did their small but vital part to help win what has become and hopefully will always be the last world war.

Julia Kwan Returns to VIFF with Everything Will Be