Born Thomas Cullen Daly in Toronto, Tom Daly was a major figure in the illustrious history of the National Film Board where he was a producer-director-writer and editor who also appeared in front of the camera on rare occasions. He is credited with producing more than 300 titles for the NFB where he began work in 1940 almost immediately after graduating from the University of Toronto. Widely acknowledged as the most important figure ever to work in the English-language branch of the NFB, Daly was a brilliant editor and producer, capable of inspiring his colleagues’s best work, and he worked with some of the best the NFB had to offer.

He learned the art of film editing from two of the greatest documentary filmmakers to emerge from Great Britain, Stuart Legg and John Grierson, and went on to mentor a host of filmmakers, including Roman Kroitor, one of the inventors of IMAX, and Wolf Koenig, arguably one of the best cameraman in the NFB’s history. Daly established the stock shot library, essential for The World in Action series, and during the war edited several of the Canada Carries 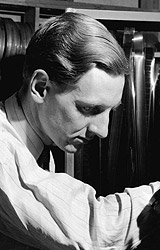 On and The World in Action films. He produced his first film in 1945 and rose to become executive producer of Unit B in 1951.

Under his leadership, Unit B became the NFB’s most honoured creative arm and was home to some of Canada’s most brilliant and accomplished filmmakers, notably Wolf Koenig, Colin Low, Roman Kroitor, Gerald Potterton, Don Owen, Robert Verrall, Norman McLaren and Arthur Lipsett, whose award-winning films of the 1950s and 1960s brought international recognition for their innovative approaches to documentary and animation.

Daly was the executive producer on Candid Eye, the celebrated 14-film cinéma-vérité series made between 1958 and 1961, and was the editing genius behind the groundbreaking multi-screen experience In the Labyrinth at Montreal’s Expo ’67.

He retired in 1984 with a legacy of more than 300 films, produced during 44 years of dedicated service.

The NFB’s blog features a tribute to Tom Daly where visitors can watch some of his films and add their own comments and recollections.

Tom Daly died at the Chateau Westmount in Montreal after a long illness. He was 93 years old.