Hubert Davis received a BA in film and communications from McGill University and studied creative writing at the University of British Columbia with screenwriter Peggy Thompson (The Lotus Eaters). He edited more than 30 commercials and music videos at Panic and Bob, a Toronto company specializing in editing for the advertising industry. He was hired as the first assistant editor on Deepa Mehta’s Bollywood/Hollywood (2002) and The Republic of Love (2003).

His 2005 directorial debut, the short Hardwood, is a powerful film exploring the life of his father, former Harlem Globetrotter Mel Davis. Davis chronicles his father’s life as a basketball player, and as the father of himself and his half-brother in Chicago, where the elder Davis was married to a black woman before returning years later to 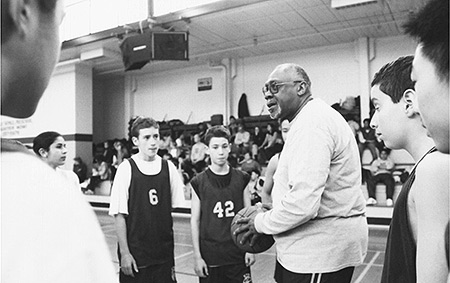 Vancouver to be with Hubert’s white mother. Exploring ideas of fatherhood, multiracial relationships and the politics of the family, Hardwood is an unflinching, thoughtful and compassionate journey through the Davis family album. It was nominated for an Oscar in the documentary short subject category, and a News & Documentary Emmy Award for outstanding cultural and artistic programming. Davis is the first Afro-Canadian to be nominated for an Oscar. Harwood also won four awards at the Yorkton Film Festival, including best film of the festival, and best documentary short at the Worldwide Short Film Festival. Davis was awarded the Don Haig Award for top emerging Canadian director at Hot Docs 2007, given to an “emerging filmmaker whose work has bridged the documentary and fiction filmmaking worlds.”

Davis’s 2009 film was the documentary feature Invisible City, made for TVOntario, which received a limited theatrical release. Davis spent three years following the lives of two teens living in Regent Park, Toronto’s troubled public housing complex. Balancing an intimate portrait of its subjects with a look at the wider transition of their community, Invisible City is a quietly powerful documentary that revisits many of the same themes in Hardwood. It won best Canadian documentary at the 2009 Hot Docs festival.

In 2012, Davis completed work on the NFB short documentary The Portrait, about Canadian artist Phil Richards who was commissioned to paint a portrait of Queen Elizabeth II for her Diamond Jubilee. His other films include the dramatic short Arbua (2006), Move Your Mind (2010), a NFB documentary short on noted theatre director Robin Phillips, The National Parks Project (2011; Davis directed the segment on Manitoba’s Wapusk National Park, one of 13 shorts that make up this compilation film) and CTV’s Darkness and Hope: Depression, Sports and Me (2012), which explores depression in sports hosted by TSN broadcaster Michael Landsberg.