(2005 – Toronto, ON) Deepa Mehta has long been one of the more controversial figures in both the Canadian and Indian film industries. One of the first women to carve out a significant career in Canadian film, and certainly the first Indo–Canadian woman to do so, Mehta has also drawn fire in both Canada and India for her choice of subject matter. Her films have dealt with racism (her first feature, Sam & Me); a love affair between two women of different generations (Fire); the partition of India and Pakistan in 1947, the most contentious event in modern Indian history (in her epic Earth); and the conflict between old–world traditions and new–world freedoms in Toronto’s contemporary Indo–Canadian community (both Bollywood/Hollywood and Sam & Me).

That said, it’s almost always been impossible to separate controversy from preconception and/or prejudice in Mehta’s case. Hearing the furor around some of her films isn’t the same as actually seeing it. Upon viewing the films, it becomes painfully obvious that it’s not Mehta’s usually even–handed, thoughtful treatment of the issues she addresses that’s the problem, but the fact that she’s dared to address them at all.

Her most controversial work remains Water, however. The film was originally set to be shot in Benares, India, but the production was shut down in 2000 when Hindu fundamentalists rioted and trashed the set. Reportedly, they were incensed by the film’s subject matter—the treatment of widows in India—although there were also allegations that local politicians were demanding a share in the film’s revenue and had stirred up the fundamentalists when their requests were denied. In 2004, under a shroud of secrecy, Mehta finally shot the film just outside of Colombo, Sri Lanka. The third and final instalment in her trilogy of the elements (following Fire and Earth), it’s also her most assured, powerful and possibly best work to date—a beautiful and moving conclusion to one of the most ambitious projects in Canadian cinema.

Set in 1939 on the Bengali/Behar border, Water focuses on three widows who, according to tradition, have been separated from the rest of society and placed in a house exclusively dedicated to their “kind.” As the film opens, we see precocious, eight–year–old Chulia (Sarala, pictured above) dangling her legs off the back of a wagon, blissfully unaware of the fact that her husband is dying and she’s about to be taken from her home and family because of ancient Hindu religious beliefs. Upon her arrival at the ashram where she’s probably going to spend the rest of her life (widows aren’t permitted to remarry or socialize with the outside world), she meets the retiring Kalyani (Lisa Ray, one of the luminescent leads of Bollywood/Hollywood), the devout Shakuntala (Seema Biswas) and Madhumati (Manorma), the nasty, dictatorial woman who runs the house.

As the film proceeds, it becomes clear that Madhumati is even more suspect than she seems, and is operating a prostitution ring that effectively keeps the house afloat. Kalyani is one of the girls who’s requested most often. Things become complicated when Narayan (John Abraham), a young progressive follower of Mahatma Gandhi, and Kalyani meet. Narayan offers a new life for Kalyani, and—aided by Chulia—she begins to entertain the possibilities of escaping the ashram. Despite the very specific setting, Water deals with decidedly universal issues. It’s as much about the place where religion, cultural mores and politics intersect as conflict.

The time in between the shoots helped make Mehta’s return to the material less difficult. She made her most buoyant film, the wildly successful romantic–comedy Bollywood/Hollywood, upon her return to Canada, and then a visually stunning, but less successful, adaptation of Carol Shield’s novel Republic of Love. “It took five years [to make Water] because it took five years to get over it,” she confides as we sit down to talk in her home in downtown Toronto. “To get over the pain and the association of being shut down and feeling like a victim, all those things I went through—feeling abject despair for many years. But Bollywood/Hollywood released me from a lot of pain. To do Water again was as if I was seeing the script for the first time.”

Narratively daring, with several rather unexpected turns (which, in some ways, play off the controlling image), Water begins by focusing on Chulia, and our first interactions with the denizens of the ashram are presented largely through her eyes. Midway through the film, Mehta shifts the focus to Kalyani and her affair with Narayan, but by the end, it’s Shakuntala who commands her attention—particularly because of her realization that her culture and her religion are not as seamlessly intertwined as she thinks.

Mehta also takes risks with the psychology of her characters. At certain points, most, if not all of them are capable of sinister acts, even young Chulia. In response to a particularly shocking act of cruelty by Madhumati, Chulia kills her parrot, the only thing in the world she truly cares for. “It’s totally instinctive,” says Mehta about Chulia’s actions. “One of the people who read the script said perhaps I shouldn’t have killed the parrot, but I was adamant about it because this is not a nice place. What happened in that house is not nice. It’s not pleasant. It calls for a gesture that might not be palatable for many, but it’s important for Chulia, and to show how horrific the situation really is, and to show that kids aren’t beyond anger.”

Even altruistic acts are suspect. After Chulia steals some sweets for an aging woman whose health is failing, the woman dies shortly afterward, and Chulia assumes it’s because of her actions. “Chulia believes that she’s responsible because it’s forbidden,” says Mehta. “Widows aren’t allowed to have sweets, and because she gave her a sweet that means God, or whatever it is, punished her. Which is another one of the things I was playing with in the film—the sort of obtuse things that contribute to the darkness. An act of kindness, in her head, also contributes to the darkness.”

Because of the delay, Mehta had to recast. Originally, Shabana Azmi and Nandita Das, the female leads from Fire, were going to play Shakuntala and Kalyani. It worked out surprisingly well, however. Ray is effective as Kalynai and Biswas essays Shakuntala with assurance, capturing the crises of conscience her character experiences beautifully. The major find, though, is Sarala, the young Sri Lankan who plays Chulia. although she had to learn Hindi phonetically.

The biggest logistical change involved the location. Mehta made inquiries about returning to Benares, but the apparent readiness on the part of people there made her uneasy. Instead, she opted to shoot in Sri Lanka, a spot that had unexpected benefits. “We didn’t have the sweep of Benares, so it became a smaller town on the Bengali/Behar border in my head,” Mehta says, “and we had to make everything smaller because of that. It was interesting because I felt that I was going more from the specific to the universal with [the new] location. Benares is so large and overpowering, it had almost become a character by itself. I think this time, because it was more contained, the characters breathed more. I cut a lot of the dialogue out. I pared it down. Perhaps I just felt more confident in my ability that I could actually tell a story visually than I could five years ago. I felt if it were a gesture or a look, I had no problem holding on to it as opposed to having them [the characters] talk about what they were feeling. But the essence of the dialogue didn’t change at all. The story didn’t change at all.”

This confidence in her ability to tell the story in visual terms is evident in the layered manner in which Mehta develops the central image. From the opening shot of lily pads to the funerals of some of the principals, and even with seemingly innocuous lines of dialogue, the film stresses the notion of fluidity and change, a concept that contrasts harshly with the rigid and immobile principles behind the ashram. The holy river where the house is located to some degree taunts the characters, representing, in spiritual terms, liberation—a liberation that’s effectively denied them.

The pared–down, deceptively simple feel of the narrative recalls the lyricism of one of Mehta’s greatest influences, Bengali master Satyajit Ray. In fact, when Mehta asked composer Mychael Danna what he heard when he saw the film, he replied Pather Panchali, Ray’s masterpiece from 1955; however, the historical sweep and its emphasis on a culture going through seismic shifts is very much in line with Mehta’s other work, most notably Earth. 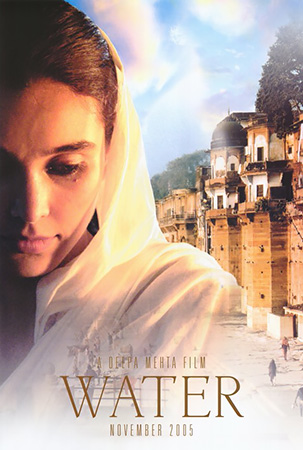 Mehta stresses the seismic political and cultural shifts occurring outside the walls of the ashram through Narayan’s progressive beliefs and the figure of Gandhi. On a socio–historical level, Gandhi comes to represent the widows’ desire for a better life in the here and now. He’s also seen in historical terms and presented, at least initially, through the eyes of her less salutary characters. “That period of history—the 1930s—is very interesting,” says Mehta. “The awareness of Gandhi was permeating not only the intellectuals but also the untouchables, the working class and the middle class. Everybody had their own take on who he was. When I was writing it, I set up Gandhi in a very negative light. Madhumati and her eunuch keep on talking about Gandhi: ‘What is he doing? He’s ruining this wonderful culture, which is so great and everything is running so well. Now there are shootouts. Don’t you know he’s terrible—he cleans his own latrines.’ And in the end you realize what he stands for. He’s a kind of liberation, too.”

For the record, her experience with Water hasn’t soured Mehta on tough subjects. Currently, she’s completing a documentary on domestic abuse called Let’s Talk about It, shot from the perspective of children who have lived through it, and her next feature may just be an adaptation of Salman Rushdie’s celebrated and notorious Midnight’s Children. The release of Water will be accompanied by a book by Devyani Saltzman, Mehta’s eldest daughter, who recounts the film’s troubled history. Distributed by Mongrel Media, Water is set to open in Canada this fall.

Also see: Deepa Mehta’s filmography.
Click here to watch a trailer and learn more about the cast and crew of the 2005 film Water.

This article originally appeared in Issue 51 of Take One magazine in 2005. Northernstars.ca acquired the digital archive of Take One in 2007. When this was published Steve Gravestock was the programmer/associate director, Canadian Special Projects, at the Toronto International Film Festival Group. As of 2020 he was still with the Toronto International Film Festival Group.

Guylaine Dionne – A Look Back