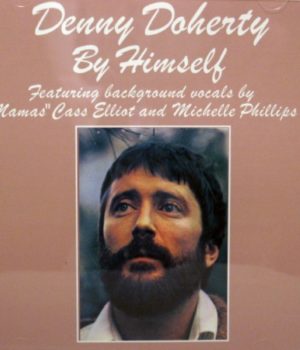 He was born Dennis Gerrard Stephen Doherty and he was a singer, songwriter, sometime actor and one-quarter of the legendary 1960s folk-rock group, The Mamas and The Papas.

Born in Halifax, Doherty’s name, no matter what he did in his life, will always be tied to his time in music. Doherty launched his in 1960 in Montréal as co-founder of the Colonials, which went on to become the Halifax Three. In 1964 he formed a group called The Mugwumps with Cass Elliot. Leaving Elliot behind, he later joined a group called The New Journeymen, where he met John and Michelle Phillips. When they decided to form their own group, Elliot rejoined Doherty and the Mamas and Papas were born.

What most people forget, if they ever knew it, is that the group was almost a flash in the pan. They lasted just 3 years and ended due to abusive drug use and intergroup sex problems. But they also produced five albums and had 10 hit singles. Some of their songs remain essentially anthemic, helping to define a time and place not just in music, but in the rise of the youth culture which would come to dominate almost all forms of culture, fashion, publishing and communication within a few short years. It is thought that the group sold some 20 million records before they disbanded in 1968.

Doherty tried a solo career but despite having some big labels behind him, his career never took off. His acting career started in the 1970s when he appeared on Broadway in the 1974 play Man on the Moon, a musical written by John Phillips. Back in his home town of Halifax in 1978, Doherty performed with John Neville at the Neptune Theatre in plays like The Taming of the Shrew, Much Ado About Nothing and Cabaret. Doherty was also involved in a number of musical projects, including an autobiographical musical, Dream a Little Dream, which premiered in Toronto in 2001.

Only Michelle Phillips (born 1944) remains. Cass Elliot died as a result of a heart attack in 1974, when she was just 30 years old. The group’s chief songwriter and producer John Phillips, who had at last successfully transitioned to a drug-free life and was starting to rebuild his career, died in 2001 when he was 65. Inducted into the Canadian Music Hall of Fame in 1996, Denny Doherty died suddenly at his home in Mississauga, Ontario, just west of Toronto, after suffering an aneurysm in his abdomen. He had turned 65 two months earlier.

This biography is Copyright © 2009 by Ralph Lucas and may not be reproduced without prior written permission. For more information about copyright, click here.