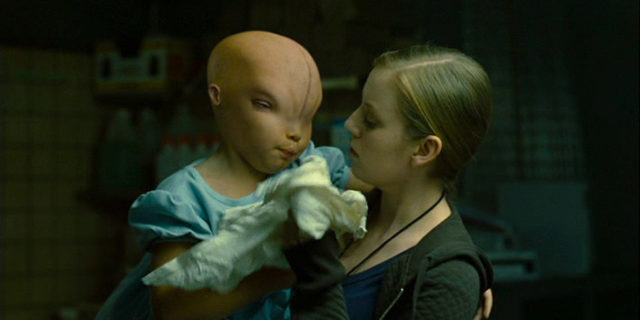 Dressing the Stars for Halloween
by Jim Slotek

(Originally published: October 27, 2017 – Toronto, ON) Sure, Canadians are naturally funny. But we’re scary too. Seriously, don’t turn your back on us, we’re liable to turn around and bite.

Classic slasher horror like Prom Night and My Bloody Valentine originated here, as did the Resident Evil and Silent Hill series. David Cronenberg got his start blowing up heads and turning people Rabid. The late George Romero moved to Toronto and shot the last films of his Living Dead oeuvre here.

And lately, Guillermo del Toro has spent so much time in Toronto on movies like Pacific Rim, the sea-monster movie The Shape Of Water and the vampire TV series The Strain, you’d think we got him from Mexico as part of the NAFTA deal.

So why not make Halloween a distinctly Canadian holiday?

Here’s a round-up of some of our favourite Canadians and actors from Canadian horror films, and the costumes in which we’d like to see them trick-or-treat.

LOUIS DEL GRANDE: A prosthetic exploding head. The erstwhile star of CBC’s ‘80s series Seeing Things appeared lately in the movie The Second Time Around. But to many of us, he’ll always have the most famous nuked noggin in history in Cronenberg’s Scanners.

ANDREA MARTIN: We see her wearing a ‘70s college girl outfit with a knife in her back. Before we ever knew her as Edith Prickley, she was a doomed sorority sister in Black Christmas.


JEFF GOLDBLUM: Who wouldn’t want to see him as Brundlefly again (from, yes, another David Cronenberg opus, The Fly)? For extra treats, he could spit up on a candy hand and make it melt.


JEREMY IRONS: Dressed in a surgeon’s gown and carrying an array of the frightening-looking gynecological tools he (and his special-effect twin brother) wielded in Dead Ringers. The last Cronenberg reference, we promise.

SARAH POLLEY: We see her, carrying around in a Snuggli, the monster-baby (pictured at the top of this article) she was carrying in utero in Splice (produced by the aforementioned de facto Torontonian Guillermo del Toro).


JAMIE LEE CURTIS: As, what else, a blood-spattered prom queen from Prom Night. That movie and Halloween cemented her early reputation as a Scream Queen. She stuck around the Great White North long enough for yet another Canadian slasher, Terror Train.

MICHAEL IRONSIDE: So much to choose from with this Canadian-born career “heavy.” But Ironside, who played the doomed Lieut. Rasczak in Starship Troopers, could score lots of candies going door-to-door with a giant arachnid claw through his chest.

RUTGER HAUER: We see him dressed as a hobo, carrying a shotgun, from his performance in the Canadian grindhouse film Hobo With A Shotgun. Self-explanatory, really.

GERAINT WYN DAVIES: Dress him up as a Metro cop with fangs, in tribute to his three seasons as an 800-year-old vampiric Toronto “graveyard shift” police officer on the Canadian TV series Forever Knight. Think nobody remembers the show? The entire series was recently re-released on DVD in Australia.

DAVID HEWLETT: Sure, you could dress him up in something sci-fi as per his role as Dr. Rodney McKay on the Canadian-produced Stargate SG-1. But we remember him for his creepy debut role in the Canuck horror film Pin, as a guy whose only friend is a med school anatomy doll. I’m sure we have one of those in our basement somewhere.

JENSEN ACKLES: A.k.a. Dean Winchester on the shot-in-Toronto WB series Supernatural. We’d dress him up in a miner’s outfit and gas mask, carrying a blood-soaked pickaxe – which was what the killer wore in the 2009 reboot of the Canadian slasher classic My Bloody Valentine. And Ackles’ character turned out to be the killer after all, right? Or did he?

KATHARINE ISABELLE: A-WOOOO! The star of the entertaining 2000 Canadian mean-girl werewolf movie Ginger Snaps (and its less terrific sequels Ginger Snaps 2: Unleashed and Ginger Snaps Back: The Beginning) surely has this lycanthrope act down by now. Look for one scary seductress werewolf.

MELISSA SUE ANDERSON: Might we suggest she dress up as a birthday cake? Laura’s blind sister Mary from Little House On The Prairie went “bad” (maybe) in the 1981 Canadian slasher Happy Birthday To Me, playing a girl whose friends start dying just before her 18th birthday.

And finally, VOLDI WAY: Here’s a trivia name for you. He played the title ghost of a murdered wheelchair-bound child in the 1980 Canadian thriller The Changeling with George C. Scott. Voldi reportedly now owns his own software company in Valencia, California. But if he’s willing, I’m sure we can find an antique wooden wheelchair for him to wheel around in for Halloween. Just say boo!