The grand old girl of the movies is gone. Gone, but not forgotten. For Marie Dressler has left behind her the fruition of her sixty-four years of living; a “code” all her own which helped her over those thorny spots of life before she became the headliner the world bowed to in her declining years.

I was one of the few friends Marie Dressler talked with on her last visit to New York. Doctors had ordered her to be very quiet. They knew then that her days were numbered. And I think Marie knew it too, though she was too good a trouper to let go.

And that thought was the sustenance which kept her going—the hope that something would turn up soon—some medical discovery which might offer her a new contract on life.

I saw Marie the day she received a personal letter from Mrs. Franklin D. Roosevelt, asking her to say a few words over the radio in behalf of the N.R.A. That was what brought up the question of 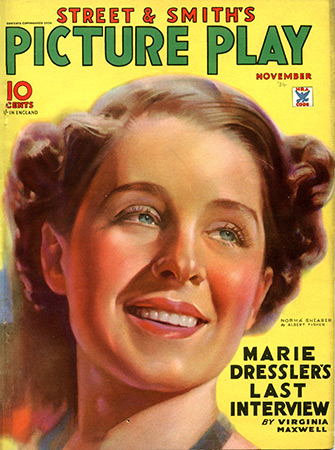 codes. And it was then Marie told me about her own little code.

“Keep your chin up,” she said, and her eyes flashed with that fire which you’ve seen so often on the screen. “Keep it up high so it can ward off any blows to the heart.”

She wasn’t speaking of physical hurts. Rather those thumps which life can give to one`s spirit when everything seems dead wrong. And if anybody knew those hurts it was Marie Dressler.

After years of stardom on Broadway, she walked the streets, begging booking agents, just to recommend her for a part—no matter how small.

But the world had changed during those hectic years of the War. Miss Dressler`s kind of comedy, the kind which had made her a top-notch attraction when she played “Tillie`s Nightmare” and sang her inimitable “Heaven Will Protect the Working Girl,” had gone out of style.

Marie finally cornered an agent one day and asked him to tell her the truth. Why couldn’t she get a job when the world had applauded her only a few years before?

He looked at her for a moment, then decided the kindest thing he could do was to tell her the truth.

“You’re out of date, Marie,” he said. “You’re too old. People are jaded and satiated with sorrow. They want youth and life and gayety of a new sort. That`s why no producer will put you in his show.”

It was a staggering blow to Marie Dressler. She knew very well she was no ingénue. But she scarcely expected the world to grow tired of her clowning so suddenly.

“I went home.” Marie told me, only a few months ago, when summing up her life, “and I looked at myself in the mirror. He was right. No use kidding myself any longer,”

“‘Marie’ I said to myself, “‘you’re through as an actress. You’ve got to find another job. And find it quickly.'”

She tried various occupations from tea-room hostess to coaching young aspirants. But it was hard going. Marie was not even then in the best of health. Her predicament was doubly hard because she had heard the thunder of applause. And that is always infectious to one`s ego.

“No, I didn’t mind not being a spotlight attraction,” Marie old me, a little grimly. “What I felt most was not being 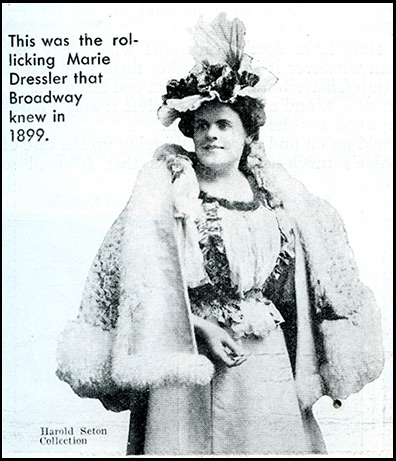 prepared to do anything except act. It had never occurred to me I wouldn’t always be doing just that to earn a living.”

“I ran into Fritz Kreisler one day. He felt sorry for me and offered assistance. I told Fritz I’d like to open an American boarding house in Paris. Where Americans could get good old-fashioned ham and eggs and coffee.” Marie smiled. “I had enough cash left out of my savings to go there and get started, though I need the patronage of celebrities like Kreisler to attract guests.”

“Kreisler agreed. He said he would live at my place whenever he was in Paris and promised to recommend it to other people of international reputation. Then came the rug again,” Marie went on. “Before I could say Jack Rabbit, I found a bunch of my old theatrical friends all ready to come over and live with me—on the cuff. Do you know what that means?” she laughed.

I nodded. So she decided, when figures were set on paper before her, that the boarding house would be a debit instead of a credit.

What to do next? EX-Mayor Reynolds of Long Beach, New York, invited Marie to be guest of honor at one of his famous beach parties. It was one of those informal affairs where everybody eats a hot dog and sits on the beach around a bonfire.

Marie pitched in and sizzled those frankfurters to the best brownishness His Honor had ever tasted. Praise came unanimously from those present.

Just a little of that fine domesticity for which Marie Dressler has always had a flair but found herself unable to develop because she was an actress and the theater claimed all her time.

It gave Marie an idea. Why not a hot-dog stand? The very best hot-dogs ever to be sizzled for a hungry crowd. Long Beach was a bit far from the city; deep in her heart she always carried the torch of hope that someday Broadway would call her back again. And she wanted to be near it so that she might heed that call.

So the decided on Coney Island, the hot-dog rendezvous of the world. Mayor Reynolds conferred with good-natured Al Smith. Al thought it was a joke; he couldn’t believe that Marie Dressler, recent theatrical toast of the town, wanted to run a hot-dog stand.

“That`s the trouble with being a so-called big shot,” Marie told me. “People are afraid to offer you a menial job. You could starve to death as a celebrity and nobody would believe it. You’re not big enough then for the big jobs and you’re too big for the small ones.”

Al Smith arranged a permit. Marie set herself up a hot-dog stand at the tail-end of Coney Island.

As she told of her little adventure, her eyes shone with the pride of achievement. She was terribly proud of that hot-dog stand. She had actually found a way of making a living outside the theatre.

“And why shouldn’t I be proud of it?” she asked, a little surprised that anyone might belittle it. “If I do say so myself they were the best hot-dogs anybody ever tasted. All brown and toothsome and the creamiest mustard you ever slapped over their hides — mmmm, I can taste ’em yet!”

“You know — she suddenly grew more serious — “no job is ever menial. Just doing any little job well makes it a big job.”

“This thing called living seems to me like a great big patchwork quilt. All the little pieces, like people doing their own little jobs, fit together to make a whole. And when we’re all coordinated that way the world will be as a colorful patchwork quilt.”

Of course the world has since known of Marie Dressler`s stroke of good fortune when Billie Burke came upon her one summer afternoon while Billie was riding in a promenade chair.

Billie Burke couldn’t believe her eyes. Could that motherly-looking woman in the big white apron really be Marie Dressler? Behind a stand selling sausages to a hungry Coney Island crowd? Billie Burke looked again. It was Marie! Billie went over and shook hands with her and Marie related how happy she was in her new venture. Not one hint of financial distress, not one whining word from the stalwart Dressler.

But Billie Burke glimpsed the longing which shone behind those kindly old eyes; longing for the footlights and the applause which Marie had known only a short time before.

Miss Burke got in touch with Frances Marion, the scenario writer. Marie Dressler had once befriended her when she was a cub reporter on a San Francisco newspaper. It was like this.

Miss Marion had been sent to interview Marie Dressler at the theater. She came away thrilled at Marie’s kindliness to a nervous young writer and promised to return her generous courtesies if ever the time should come when she should be in a position to do so.

In the intervening years Marie and Frances had become close friends. Then, like most friendships when distances separates them, they had drifted apart.

Billie Burke appealed to Frances Marion who was in the throes of working on the script of “Anna Christie.” She couldn’t come to New York right away, but she could send for Marie. Frances Marion was well aware of Marie Dressler`s pride and she didn’t dare offer money. So she decided to “write in” a part for Marie. Studio executives 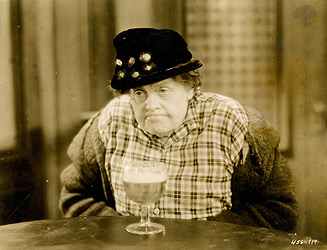 objected. Frances Marion stood her ground. After all, she had never turned out a flop picture and the studio executives capitulated to that argument.

So Marie Dressler was wired a brief contract and word to come to Hollywood for a bit in Garbo’s picture. The picture-going public who saw her rare, inimitable performance in this film as the water-front drunkard never have forgotten Dressler’s fine work.

It was Marie’s last chance. She didn’t dare lose out now. And so she told me how she put her very heart and soul into that part: to make it alive and convincing. Critics raved over her, saying she practically stole honors from Garbo.

It was Marie Dressler’s comeback and Metro realized they had something worthwhile. They gave her a better contract and before two years had passed Marie had broken all box office records the country over. She had gained the enviable spot in picture popularity—ahead of Garbo and Gaynor and Gable.

“I know I am an old woman now,” Marie said, a little sadly, but with great spirit, “And I’m sorry I won’t live to see Uncle Sam`s comeback. But this world has been on the skids for a long while and what we needed right now was a great, spiritual personality to bring us all back to common sense and sane standards. Thank God a man like that was born in time. Roosevelt—of course I mean him. He has come when we needed such a soul to save this country. And if he doesn’t succeed, then I don’t know what the future may bring.”

“I’m sorry I won’t be here to find out. Because I’ve seen a lot of depressions. I’ve gone through a lot of privations and disappointments personally. But I believe this is the beginning of a new era as well as a new deal; the kind of thing which will mark a new period in the history of the world.”

And now Marie Dressler has gone. Hollywood mourns her passing. But she has left more than a celluloid record of achievement. She has dropped seeds of homely philosophy along the way so that those she leaves behind may profit by her sixty-four years of living.

All of the images on this page were scanned from originals in the Northernstars Collection. This article was originally published in the November 1934 edition of Street & Smith`s Picture Play Magazine, three months after the death of Canadian-born actress Marie Dressler. A copy of the magazine, featuring Norma Shearer on the cover, was acquired by the Northernstars Collection. For more information about copyright, click here.