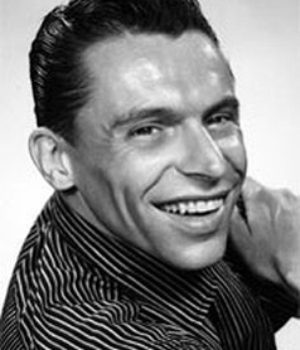 Jack Duffy was born in Montreal but grew up in downtown Toronto during The Great Depression, the so-called Dirty 30s. He attended Central Technical School, but dropped out after grade nine when his father died. He signed up with the RCAF during the war years then began his career as a singer in 1945 with CBC Radio in Toronto. By 1948 he was singing with a vocal group known as the Bob-O-Links and touring the U.S. with the Tommy Dorsey big band. When the group disbanded, he remained with Dorsey as a solo performer until he returned to Toronto in 1950. His physical resemblance to another famous Dorsey singer earned him the moniker of “the Canadian Frank Sinatra.” It was during his time with Dorsey that he developed a dependency on alcohol, an addiction he lived with, and to some degree was able to function with through much of his career. He was able to win his long battle with alcoholism in 1967.

After his Dorsey years he used his gift as a comic and impressionist to become a regular on CBC-TV, joining the cast of The Wayne and Shuster Show, which premiered in 1952. He was also a featured player on The Perry Como Kraft Music Hall (1961-63) during the height of its popularity on NBC. His other Canadian television credits include The Billy O’Connor Show (1954-56), featuring “our pet” Juliette in her first television appearance; The Barris Beat (1956-57), a weekly variety show directed by Norman Jewison; Here’s Duffy, his own variety series, which he hosted for two seasons (1958-59); In the Mood, a tribute to the big band era that he hosted from 1971 to 1972; Half the George Kirby Comedy Hour (1972-73), a faux Canadian show shot in Toronto for the American market featuring a young Steve Martin; The Bobby Vinton Show (1975-78), and a 30-minute crude sketch comedy show called Bizarre (1980-84), which aired in an edited version on CTV and in an uncensored version broadcast in the United States on the Showtime cable network.

Duffy spent three seasons with the long-running Spring Thaw and appeared regularly at the Charlottetown Summer Festival in its production of Anne of Green Gables during the 1970s. He is best remembered for playing the team captain on the long-running game show The Party Game (1970-81), which originated from Hamilton, Ontario’s CHCH-TV and was syndicated nationally. Duffy and his co-stars Dinah Christie and Billy Van would take on a team of celebrity guests in a weekly, fast-paced game of charades.

His film career began in 1978 when he was cast in The Silent Partner, which starred Christopher Plummer, Elliott Gould and Susannah York. In addition to winning six Canadian Film Awards including Best Feature and Best Director, it is one of the few critical and commercial successes made during the tax-shelter era of Canadian film production. Duffy would go on to make a total of 30 features or made-for-television movies in a career in front of the cameras that spanned 55 years. Jack Duffy was 81 when he died of natural causes in Toronto General Hospital.

This mini-biography of Jack Duffy is Copyright © 2011. It was written for Northernstars.ca by then Contributing Editor Wyndham Wise in 2008 and updated in 2011. For more information about copyright, click here.