When you think of child stars from the Golden Age of Hollywood, you may think of Shirley Temple, Judy Garland or Mickey Rooney. How about Deanna Durbin? A movie star so bright she couldn’t be filmed in colour more than once.

Born Edna Mae Durbin in Winnipeg, December 4, 1921, she lived most of her life in Los Angeles. Her parents, who were originally British, moved there in 1922 because of her father’s health. She was an average little girl growing up in the entertainment capital of the world. How could she not wind up in the business?

In 1932, she began taking singing lessons and originally hoped to have a career as an opera singer. Her extraordinary voice drew immediate attention, and after a number of radio performances, Durbin was introduced to agent Jack Sherrill, who signed her immediately to Metro Goldwyn Mayer. Shortly afterwards she was given an audition. It turned out to be a screen test in the form of a short film. Every Sunday, as it was titled, had a running time of a mere 11 minutes. It could have been the most 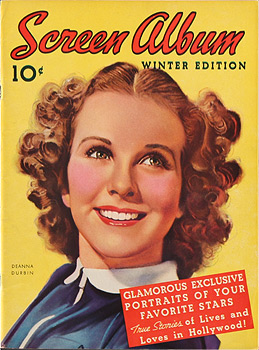 important 11 minutes in MGM`s history, but it didn’t turn out that way. Paired with Durbin was another young singer with high hopes, Judy Garland. The story goes that when MGM boss Louis B. Mayer saw the results, he said something along the lines of “drop the fat one” meaning Garland. But his command was somehow misunderstood, and Durbin wasn’t offered a contract at the legendary studio. Judy Garland was instead. She would go on to spend her entire career at MGM making some of the greatest films of that era including, of course, The Wizard of Oz just three years later.

However, over at Universal Studios, things were very different. The studio had fallen on hard times and was only able to turn out low budget, so-called B-movies. In one of its last acts of desperation, Universal had started to work on a film that would be titled Three Smart Girls. Producer Joe Pasternak happened to have seen the audition of Durbin and Garland, and 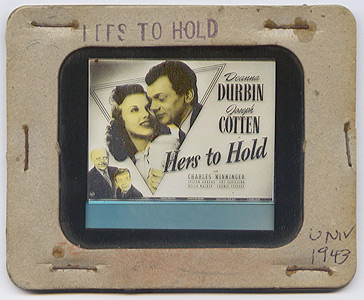 asked if Durbin was available. Offered a role, she accepted a contract at Universal. She was just 14-years-old, and was about to become a star. Three Smart Girls (1936) went on to become a major hit and immediately established the young singer as a money maker. A year later Durbin starred in 100 Men and a Girl (1937). This too became a major hit and saved Universal from bankruptcy. Durbin was given the nickname “the mortgage lifter”.

In addition to her screen work, Deanna Durbin signed a record contract with Decca Records and went on to record 50 songs during the life of the agreement, which lasted from December 15, 1936 and July 22, 1947. The image below is a Decca Records publicity photo, now part of the Northernstars Collection. 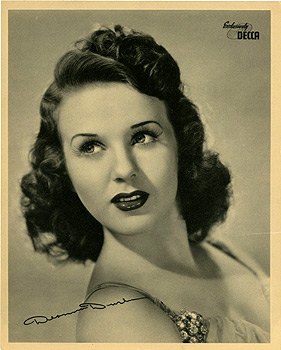 in cement outside the theatre. A definite sign that she had made it in Hollywood. Another indication would be the honourary Academy Award she and a few other child actors (including Mickey Rooney) received in 1938. The award was for their “significant contribution in bringing to the screen the spirit and personification of youth.” But Durbin was growing up. In 1939 she missed starring in the classic film The Wizard of Oz because she was too mature looking for the part. Her friend, Judy Garland, eventually got the role. That same year, at the tender age of 18-years-old, Durbin had her first on-screen kiss. It was with Robert Stack in First Love (1939), and it ripped war headlines off of the daily papers.

In 1940, Spring Parade was released and became her 8th straight hit. After filming Nice Girl? in 1941, Durbin married cinematographer Vaughn Paul. She was just 19-years-old. In 1942, Paul enlisted in the Navy, and being the supportive wife, Durbin toured Eastern army camps. In her 1943 film Hers to Hold, she actually gave blood in one scene and proudly supported the Red Cross both on and off the screen. That year also saw her marriage to Paul end in divorce.

In 1944 she made her first, and last, Technicolor film Can’t Help Singing. The rest of her films were made in black and white because it was too expensive to have Deanna Durbin and colour both in the same movie. Durbin had been making $250,000 a year since the age of 18, an unheard of sum at those times. She was the highest-paid woman in America and the highest-paid actress in the world. But she hadn’t forgotten her 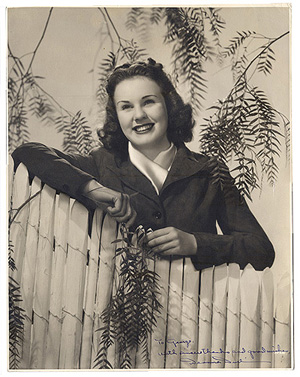 Canadian roots and appeared in The Shining Future a short that was made to help sell Canadian war bonds. She used her influence and the film also had appearances from Bing Crobsy, Frank Sinatra, Charlie Ruggles and more.

In 1944 Durbin turned 23, and perhaps hoping to avoid the folly of youth, married a man very much her senior. Playwright Felix Jackson was 20 years older than her, and for some time her life away from the cameras looked like it would turn out to be as happy as it had been in front of the cameras. There was happy news when their daughter Jessica Louise Jackson was born in 1946, but the happiness wasn’t to last. Jackson and Durbin went their separate ways just three years later. It was a bitter disappointment for Durbin, who increasingly hoped to have what most of us would call a “normal” life. While married to Jackson, she made Lady on a Train (1945). It was directed by Charles David, and they remained friends. Five years later, just a year after her divorce from Jackson, the two were married and Durbin officially retired. She was tempted just once after stepping out of the spotlight. It wasn’t Hollywood, but the 1956 Broadway production of My Fair Lady. In the end Durbin resisted and her life remained as she had hoped.

There was a legal component to that decision. In her prenuptial agreement, she made David swear she would never have to appear in a film again and to guarantee her the chance to lead the normal life she had almost desperately sought. He fought off the studios and the press for many years. She did, fortunately, grant Elwy Yost of TVOntario a number of interviews which were used when he was the host of that network’s Saturday Night at the Movies. She appeared comfortable and content and talked easily if not always kindly about her days in Hollywood.

Happily, her third marriage lasted and she was finally able to live the life she had dreamed of in southern France, far far from the bright lights of Hollywood. Deanna Durbin remained in France until her passing in April of 2013 at the age of 91. Charles David had died on March 1, 1999. Durbin is survived by two children: Jessica (from her second marriage to Felix Jackson) and Peter (from her marriage to Charles David).

This biography is Copyright © 2010 by Ralph Lucas and may not be reproduced without prior written consent. For more information about copyright, click here. All of the images used in this biography were scanned from originals in the Northernstars Collection.