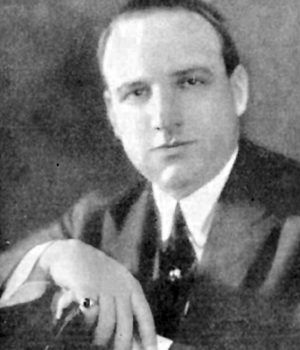 Allan Dwan started out in life as Joesph Aloysius Dwan in Toronto, Ontario. When he was just 11-years-old, his family moved to the United States. He attended Notre Dame, where he studied engineering but gravitated toward the bright new medium of film. He landed his first job at Essanay Films in 1909. Two years later he made the move to Hollywood, where he learned his craft by watching other directors and asking his actors for their advice.

Like most people in the movie business at the turn of the century, Dwan did just about everything. It’s been estimated he was involved in some 1,500 movies, either as an actor, producer, writer or director. In fact, he directed about 400 movies. Exact numbers are hard to come by because so much of the early history of filmmaking has been lost. For example, on September 11, 1915, the Famous Players studio on 26th Street in New York caught fire and was virtually destroyed. Not only was its production schedule thrown into chaos, but also the studio`s entire store of unreleased negatives was in a safe hanging on a charred wall. The fire, which happened on a Saturday, had been so hot the safe could not be opened until Tuesday. One of the negatives that was lost forever was Dwan’s The Foundling, starring Mary Pickford.

Dwan’s vision as a director also made him a major innovator in early cinema. He would “see” a shot, or sequence, in a certain way and then figure out how to get that shot. He is credited with supervising the world’s first crane shot and America`s first dolly shot, both in 1915.

This innovation paid off when he was directing Mary Pickford in another movie, A Girl of Yesterday. One scene called for the villain to abduct Pickford and fly her off in an airplane. In 1915, flying was far from safe and her often overbearing mother, Charlotte Smith, laid down the law that the plane could not fly more than 100 feet off the ground. Dawn got around this by having the plane fly parallel to a road high atop the Griffith Park hills. While technically the plane was never more than 100 feet above the park, the sequence, filmed from a camera car, looked like it was shot in mid-air, thousands of feet above the ground.


Dwan’s best work spans about 15 years starting in 1916. During this period he directed many of the Douglas Fairbanks features. Two of the most memorable being Robin Hood and The Iron Mask.

Speaking of The Iron Mask, Dwan once called it , “the last of the big silents.” Midway through production, Fairbanks decided to yield in part to the rapidly emerging demand for talking pictures and added three spoken sequences to the film.

Dwan is also credited with saving the career of the great Marie Dressler. Dressler had been blackballed by the film industry, and according to a number of accounts was considering taking her life after years of unemployment. She was sitting in a New York restaurant when Dwan happened by and thought she would be perfect in a film he was about to start. Her career took off like it never had before, and she gave us some of her best performances, particularly after the advent of sound. Dwan also continued to work long after the movies became talkies. He directed Shirley Temple in the classic Heidi in 1937 and again the following year when the child star went before the cameras for Rebecca of Sunnybrook Farm. His old pal, Mary Pickford, had starred in the 1917 version.

Dwan made many more movies before retiring, including two notable films, Brewster’s Millions in 1945 and The Sands of Iwo Jima in 1949, a movie that produced an Academy Award nomination for its star, John Wayne. He made his last movie, Most Dangerous Man Alive, in 1961, a remarkable 50 years after directing his first motion picture.

This biography is Copyright © 2016 by Ralph Lucas and may not be reproduced in any form without written permission. For more information about copyright, click here.