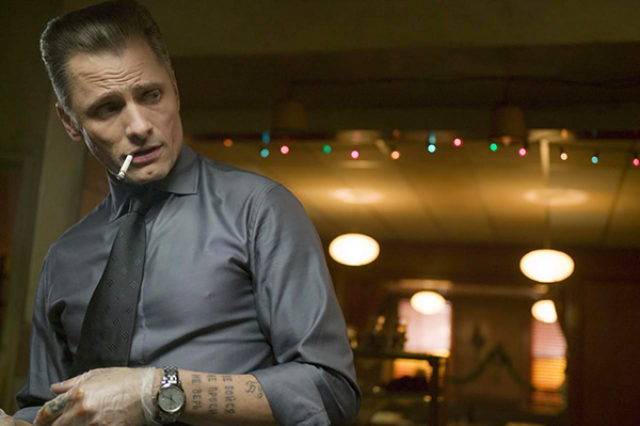 Casting around for a way to start this review, an expression usually associated with weddings came to mind: Something old, something new, something borrowed… While Eastern Promises marks the next step in the growth of David Cronenberg and is certainly his most polished film, it isn’t, unfortunately, a giant step in any particular direction.

Allow me to set the scene. I saw Eastern Promises at its first showing in general release in Toronto. It started at around 1:15 on a Friday afternoon and it was playing in a large theatre in a multiplex that was also hosting films on the penultimate day of the Toronto International Film Festival. I was pleased to see that just about every seat was taken by time the interminable commercials and trailers stopped and the movie actually started.

Something old? Within the first few minutes, Cronenberg puts his highly recognizable stamp on this new movie with a messy—although not too bloody—throat slashing. Set in a barbershop in present-day London, there is something vaguely familiar about the scene. It`s one of those almost iconic Mafia killings, except this time it`s the Russian underworld at work and at play. While Cronenberg`s last film, A History of Violence, was rife with gunplay, the Russian mob prefers a more silent method of dispatching its various nuisances.

The main story centres on two very different people. The first is the mysterious and often ruthless Nikolai Luzhin (Viggo Mortensen), who is tied to one of London’s most notorious organized crime families. His carefully balanced existence is suddenly threatened by a London hospital midwife, Anna Khitrova (Naomi Watts) who lives far outside the shady underworld inhabited by the Russian mob. When she investigates the identity of a Russian teenager who has died in childbirth, she uncovers a prostitution racket and potential evidence linked to the crime family, thus setting in motion a classic tale of Good vs. Evil.

Something new? As the story progresses, there are plenty of clues as to what`s really going on. I won’t give it away here, but about halfway through, you begin to get an inkling about the main character, Nikolai. That inkling is eventually confirmed and when it happens you’re tempted to congratulate yourself for being so smart. Of course, Cronenberg deserves the credit for letting the veil slip just enough to keep us guessing as the story unfolds. Shortly before we learn the truth, Nikolai is ambushed by a couple of killers imported with the sole purpose of dispatching him. Cronenberg creates a masterful ballet of tension and violence in a scene set in a London bathhouse. After we learn the truth, Nikolai and Anna briefly join forces in a short sequence of scenes that ends in something that is new for Cronenberg. There is a genuinely touching scene that lingers on screen longer than you would think is necessary and certainly longer than belongs in a “typical” Cronenberg movie. But it is not out of place in this film.

Something borrowed? Nothing in Eastern Promises is really borrowed and the film is uniquely Cronenberg’s own, but it is a genre film and as such it contains echoes of other mob movies. In particular, there were several scenes that made me think of The Godfather, especially the final shot of Nikolai. It also contains echoes of previous Cronenberg movies and you are not-so-subtly reminded that you are, after all, watching a “Cronenberg film.” While all directors have a certain style, it seems as if Cronenberg is unwilling (or unable) to move on. It isn’t so heavy-handed that he risks becoming a one-trick pony, but given a fresh canvas to play on time after time, it would be interesting to see what he could do if violence, death, destruction, and mayhem were banned from his palette.

As mentioned, Eastern Promises is, in my opinion, Cronenberg’s most-polished film so far. In straight movie-going terms it gives plenty of value for the price of entry and the story is well-told, well-acted and well-directed. And for the first time, I actually wondered what might happen to the characters Cronenberg created once the film faded to black and the closing credits started to roll.