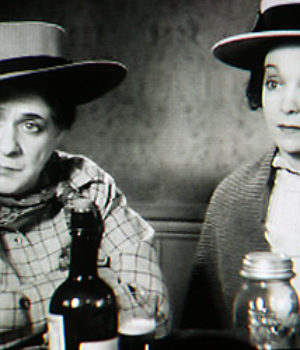 If we were to create a list of the virtually unknown Canadian-born actors, actresses and directors, ranking them them from the top as being the least known, chances are Maude Eburne’s name would be near the very top of that list.

Eburne was born to Scots-Irish parents in Bronte-On-The-Lake, a “small forsaken village on Lake Ontario near Toronto” as she reportedly remarked. Much like many in showbiz to this day, Eburne was always cautious about her true age, but it is thought she was born about 1875 and began her career on stage just as the movie business was getting started. Like most successful actors of that time, Eburne eventually found her way to Broadway but her first steps down that path started long before she would make it to the Great White Way.

After attending Toronto’s Havergal College, the future actress appeared in amateur theatricals and toured the province giving “readings.” It is thought Eburne made her professional stage debut in 1901 with the Shubert Stock Company in Buffalo, New York almost directly south of Bronte, which is today a neighbourhood in Oakville, Ontario west of Toronto. The Shubert Brothers possibly saw her, or came to know of her thanks to their early, if largely unwelcome presence in Canada. Throughout the 19th century, and well into the 20th, Canadian producers, actors and playwrights faced overwhelming competition from foreign touring stars and companies. This competition seriously retarded the development of indigenous professional theatre. In 1911 critic Bernard K. Sandwell, writing in the Canadian Magazine in an article titled The Annexation of Our Stage, complained about how the Canadian stage was in the grips of US theatre magnates such as Charles Frohman, the powerful New York Theatrical Syndicate and the Shubert Brothers who began in upstate New York and built their own chain of theatres as they made their way to New York City and Broadway.

Eburne spent the next 12 years or so learning her craft appearing with stock companies in Toledo, Chicago and Columbus. Back then it was not uncommon for her to appear as a society dowager in one scene and turn up later in the same play, but thanks to a costume change, now playing a drunken derelict. By the summer of 1913, her big break was finally on the horizon.

She was in Rochester, New York, playing the role of a cockney maid in a farce titled A Pair of Sixes, written by Edward Peple. The production company was Edgar MacGregor’s Manhatten Stock Company and in March of 1914 A Pair of Sixes was about to open on Broadway. Every role had been recast, except for Maude Eburne. After the play opened the press was very kind to her.

A reviewer in The Sun wrote: “We cannot remember ever seeing an unknown actress in an eccentric role capture an audience so instantaneously as Miss Eburne did. The instant she appeared you felt the magnetism of the artist. Whenever she appeared. she braced that particular scene up 88%.” In one act, “she consummated the most extraordinary stage collapse and fall since the fall of Ancient Rome.”

It had been a long haul and she had been on the road for many years. In August of 1914 in an interview, Eburne said “I want to play to the people of Toronto because they have been so loyal to me. There are four stock companies there this summer, and from each of them I have received a request to come and play, and I have received letters from theatre-goers there, asking me to come.” Which may be why, when a new farce called A Pair Of Queens was written for her, the pre-Broadway try-out was staged at Toronto`s Royal Alexandra in April 1916. She had appeared there in her popular A Pair Of Sixes just two months earlier.

According to one source her career on Broadway ended in 1930 after appearing in, or being credited in, just 14 plays, most of them comedies. The earliest entry we can find is for a play titled The Old Firm that opened on February 3, 1913. A Pair of Sixes had a long run from March until September 1914 and her last play was Many a Slip in 1930.

With the arrival of the “talkies,” where actors with voices obviously became suddenly very important, Eburne left the stage to concentrate on her film career. She made her screen debut playing a hilarious hypochondriac aunt to fellow Canadian Fay Wray in the 1933 camp classic, The Bat Whispers.

Among the more than 100 films she went on to appear in, some starring or costarring the biggest names in Hollywood, is the 1935 Leo McCarey comedy Ruggles of Red Gap, starring the immensely popular Charles Laughton as Ruggles. Eburne is pictured above with Zazu Pitts on the right in a screen capture from the film. 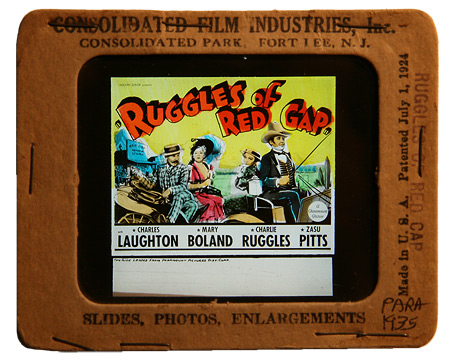 In 1936 she played a key role in Poppy starring W.C Fields. In 1939’s Meet Dr. Christian with Jean Hersholt, Maude Eburne played his housekeeper, Mrs, Hastings and went on to reprise the role in five more Dr. Christian films. Yet another comedy saw her in 1942’s To Be Or Not To Be with Jack Benny and 1944’s The Princess And The Pirate with Bob Hope. In that film Eburne plays a pipe-smoking landlady who runs a pirate hangout called The Boar’s Head Inn. When Hope rents a room, she tells him he can have the clothes left by the previous deceased tenant.

“What did he die of?” asks Hope.
“Nonpayment of rent,” replies Eburne casually striking a match on her ample backside.

Despite having turned 65 in 1940, Eburne continued a hectic pace. More than a third of her films were made between 1940 and her retirement at age 75 in 1951. Some of those films were among the most successful “series” films of the era, including two of the “Dr. Christian” films and two in the series of eleven Henry Aldrich films. She was also in the iconic American war effort film, Rosie the Riveter.

Set in 1944 in California, defence plant workers Rosalind “Rosie” Warren and her friend Vera Watson must share the town’s last available rental-room with Charlie Doran and Kelly Kennedy, who work the other shift at the plant. The landlady, Grandma Quill, also has her grandchildren, Buzz Prouty and Mabel Prouty, as well as her daughter Stella Prouty living with her. Maude Eburne played the central role of the landlady, Gramma Quill. Her last film was the religious semi-epic The Prince of Peace in 1951.

Eburne stayed in Hollywood after her retirement and died there on October 8, 1960. Her age was reported to be 85.

This biography is Copyright © 2014 by Ralph Lucas and may not be reproduced without written permission. Click here for more information about copyright.

The glass slide used in this biography was scanned from an original in The Northernstars Collection.