(May 17, 2012 – Toronto, Ontario) With Edwin Boyd: Citizen Gangster, writer/director Nathan Morlando has delivered an impressive first effort on a limited budget. The script is solid and workman-like, with only a few soft spots; the performances are strong, especially Scott Speedman as the sad sack Boyd and Kelly Reilly as his long-suffering wife and mother of his children. What the film lacks, however, is any sense authenticity. Too many compromises have been made to get the story of Toronto’s most notorious bank bandit onto the big screen.

For those who don’t know who Edwin Alonzo Boyd was, here’s a brief career recap: decorated Second World War vet, who, between September 1949 and October 1951, pulled at least six flamboyant bank heists — he leapt over counters and would flirt with the tellers as he robbed them — in and around Toronto; with his natty moustache and movie-star looks, he became a media darling; arrested in November 1951, he escaped from the Don Jail with two fellow convicts; in March of 1952 Toronto Detective Tong was killed by members of his gang; arrested again, in September 1952, he escaped from the Don a second time; ten days later he was caught and given eight life sentences in Kingston Pen; two members of his gang were hung for the murder of Tong; Boyd was released in 1962 for good behaviour and began a new life under a different name on the West Coast; he passed away in 2002.

Morlando has chosen a mostly sympathetic approach to the charismatic Boyd. He’s a hard character to like. He puts the visceral thrill of committing his crimes ahead of the interests of his wife and children, and when in prison he takes up with some pretty nasty accomplices, but Scott Speedman (pictured) meets the challenge admirably. His refusal to surrender to failure and his obsessive need to satisfy his 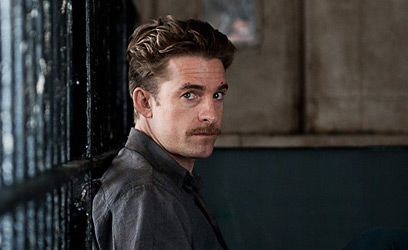 child-like ego makes him oddly attractive. He never really hurts anyone during the robberies. He treats them like an early form of performance art. A thread running through much of the film is his failed attempt to make it as an actor that drove him to a life of crime. British actress Kelly Reilly gives it her best in a role that is limited to looking happy and acting upset. It’s her devotion to her childish husband that provides the film with its emotional strength.

For reasons purely economic (the province offers filmmakers a much better tax break if they shoot in the north), Morlando shot the film entirely in Sault Ste. Marie, Ontario. The Soo, which absolutely looks nothing like either city, stands in for Toronto and Montreal circa 1950. The real Toronto only shows up, briefly, in grainy black-and-white footage. The bus Boyd drives in the opening scenes looks nothing like the distinctive TTC shape and colour. The police cars are all wrong, and the Bank of Montreal becomes something else. Headlines are in the fictional “Toronto Chronicle.” There is absolutely no sense of place, no establishing shots and the Don Jail appears as a warehouse in Sault Ste. Marie.

For decades, Toronto has appeared as a stand-in for New York, Chicago, Washington DC or Anytown U.S.A. in the movies. Yet, ironically, when there’s a quintessential Toronto film to be made, it’s made in the fucking Soo!

Wyndham Wise is the former publisher and editor-in-chief of Take One: Film in Canada. He wrote this review when he was a contributing editor at Northernstars.ca. Visit wyndhamsfilmguide.ca.