(October 24, 2016 – Vancouver, BC) October 28 is World Animation Day and to help celebrate, I had a conversation with one of Canada’s most lauded animators, Eoin Duffy.

Chatting over Skype, there’s an easy lilt in his voice, evidence of his Irish origins. He’s quick to laugh and flexible in discussing a wide range of topics. Based in Squamish BC, he creates from his animation studio in downtown Vancouver and is fully immersed in his career as a visual storyteller.

From The Missing Scarf, narrated by activist and social media heavyweight George Takei, to the surreal and existential On Departure, Duffy’s work provokes thought and stirs complex emotions.

His latest project, I Am Here, produced with the National Film Board (NFB) premiered at the Vancouver International Film Festival (VIFF) and runs for less than five minutes. Voiced by Nicholas Campbell (Da Vinci’s Inquest), it explores the myriad complexities of the interior landscape and search for meaning. The images are crisp and simple, the message as large and baffling as life itself.

“I’m a pretty happy person. But it’s good every now and then to get these melancholy big deep heavy subjects down on paper and get them out,” he says. But he’s quick to point out our consumptive existential struggles often mean little to the person standing next to us in line.

He’s having this huge massive debate internally but from the viewpoint of others, it doesn’t really matter. “It doesn’t matter if you’re a follower or an atheist, to other people, I guess to other people these big internal struggles don’t really have much bearing in their life,” he says.


Hailing from a country known for fierce religious beliefs Duffy identifies as an atheist.

“Coming from Ireland with a very religion heavy background, I see the advantage of religion in community and culture. Atheism could be a cop out. It’s easy to stand to one side and say you don’t believe in anything but in some ways I find it’s a tougher decision. It’s easy to say if someone died; they’re in a better place. They’re looking down on us. That’s an easier thing to wrap your head around then the computer’s been switched off and they’re gone,” he says.

He says many of his contemporaries in Ireland are defying norms and posing their own questions about the origin of life and the mystifying aspects of existence that used to be tidily answered through church doctrine and a blind belief in a higher power.

“It’s pretty common in Ireland now. The generation before us was more influenced by religion in every thing from government right down to local politics. The new generation, because everything was pushed so heavily on them, there’s been a huge pushback. The vast majority of Ireland’s new generation doesn’t want anything to do with religion. It backfired.”

Living in Squamish, a mountain community abundant in rugged natural beauty, Duffy finds his spiritual moments in the cathedral of the outdoors. 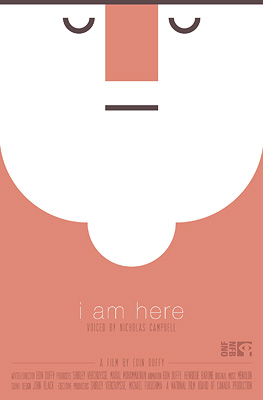 “When you scale some mountain that you didn’t think you could scale, it definitely gives you that spiritual feeling,” he notes. The natural world offers us a direct connection to a sense of ease, delight, and wonder instead of the anxiety so prolific in city life.

In the final moments of I am Here, a jarring ejection of the main character raises an uncomfortable question: are the marginalized among us considered sub-human? Duffy says he doesn’t offer answers or solutions, but his interpretation of what he sees on the streets around his Vancouver office.

He compares our propensity for adding ad blockers to our browsers to the way we move through urban life, ignoring the vulnerable and inconvenient among us. It results in a filtered experience, meant to keep us cushioned against what can be unbearable to witness.

“It is weird. I’ve lived in a few cities around the world and it does seem to be an epidemic around Vancouver. For a rich city, it is pretty strange.”

I am Here is currently touring the festival circuit.