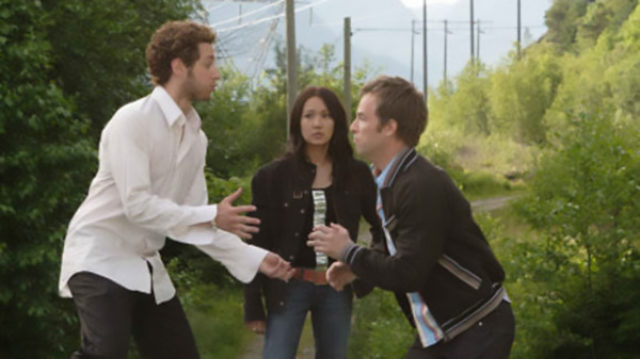 Ryan is an archetypical Gen-X slacker. He works in a cubicle as a computer code monkey and composes doggerel poetry in his spare time. When his supervisor discovers his “I-hate-my-life-I-hate-my-job” rants on his computer, he is suspended the same day his girlfriend dumps him. His father has also lost his job but thinks he has won the lottery. This turns out to be not the case, and in a roundabout way Ryan lands a job writing about actual lottery winners for Winners magazine.

From this set up, we follow the adventures of Ryan (Paulo Costanzo) as he deals with the painful reality of growing up and coming to terms with a world that is cheerfully corrupt and essentially meaningless. He crosses paths and falls in love with the beautiful Ming (Steph Song), a film set dresser whose job it is to make Vancouver look like anywhere but Vancouver. In a scene straight out of La Dolce Vita – another, much better, 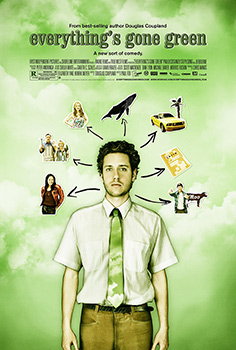 film about a generation of bored slackers – they meet by chance when a whale beaches itself on the Vancouver shoreline. She already has a slick boyfriend, Bryce (JR Bourne), who designs golf courses for a living, but that`s only a front for laundering Hong Kong drug money.

Tempted, Ryan becomes involved with Bryce and his money-laundering schemes, only to lose the affection of Ming, who becomes fed up with both of them. In an attempt to win Ming’s heart, he tries to demonstrate that he’s different from Bryce, but that proves harder than he ever expected.

Everything’s Gone Green was written by Douglas Coupland, the author of Generation X, and it’s his first screenplay. He achieves a lighthearted tone, delicately poised between comic exaggeration and recognizable reality. There is a running gag involving an artificial palm tree that is used in all the movie settings Ming works on “south of Oregon,” which keeps popping up, and Ryan`s parents (veterans Tom Butler and Susan Hogan) go into the marijuana grow-up business as a means of maintaining their middle-class lifestyle. And Vancouver has never looked better on film.

Everyone seems to be having a good time, but the film takes a while to settle into what is essentially an old-fashion romance – there is a good deal of chemistry between the likeable Costanzo and wise-beyond-her-years Song – wrapped in a gentle and at times funny satire about contemporary morality.

Wyndham Wise is the former publisher and editor-in-chief of Take One: Film in Canada. This review was written when he was He a contributing editor with Northernstars.ca