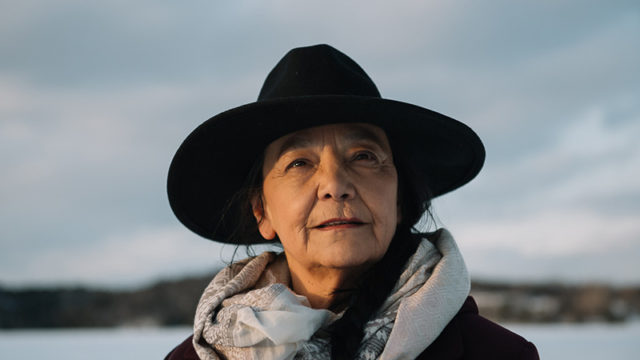 Falls Around Her opens imagineNATIVE
by Staff

(August 28, 2018 – Toronto, ON) The 19th annual imagineNATIVE Film + Media Arts Festival has announced its Opening and Closing Night Galas and both will be Canadian features.

Launching at the Hot Docs Ted Rogers Cinema on October 17, imagineNATIVE’s Opening Night Gala will be Darlene Naponse’s Falls Around Her with Tantoo Cardinal in her first starring role in a feature length film.

The film centres on the legendary singer, Mary Birchbark, who abandons a life of fame and fortune to follow the instinctual pull that calls her home. Desiring to reconnect with land and her community, she returns to the beautiful woods of her territory to seek solitude in an isolated cabin. But as the slow change of seasons marks her thirst for transformation, she begins to have the unsettling feeling that she is being watched, and quickly she finds that doors to the past are not so easily shut.

Tantoo Cardinal’s remarkable performance as Birchbark is supported by a remarkable cast including Tina Keeper, Gail Maurice and Johnny Issaluk.

When the festival wraps on Sunday, October 21, the Closing Night Gala will be Sgaawaay K’uuna (Edge of the Knife) at the TIFF Bell Lightbox. Directed by Gwaai Edenshaw and Helen Haig-Brown, Sgaawaay K’uuna makes history as the first Haida language feature film.

Set on the islands of Haida Gwaii, two extended families reunite at their annual summer fishing camp. Conflict between a charismatic young man, Adiits’ii, and his best friend Kwa, begins to tear their interwoven families apart. When Adiits’ii’s recklessness and arrogance result in a tragic incident, he flees into the rainforest abandoning his family and way of life. Wracked with grief and shame, Adiits’ii descends into madness and transforms into a Gaagiixid, a ravenous “wildman” caught between worlds and consumed by insatiable hunger. When the families return the following summer, they realize Adiits’ii has survived the winter. Now while the community hopes to restore Adiits’ii’s humanity, Kwa wrestles with his deepest desire…revenge.


Sgaawaay K’uuna will be preceded by the short film dukʷibəɫ swatixʷtəd (Changer’s Land). Directed by Tracy Rector dukʷibəɫ swatixʷtəd is a tribute to the Salish country and a celebration of how land endures despite foreign incursions of power plants and highways.

The 19th Annual imagineNATIVE Film + Media Arts Festival will announce more programming in the coming weeks with the full schedule being announced on September 18th.


Festival Passes and Packages are available only until September 24. Tickets for single screenings and events will go on sale October 1. Click here for more information.