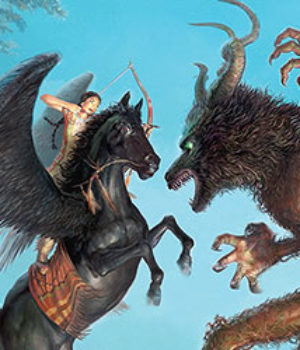 (July 13, 2015 – Montréal, QC) The 19th edition of Montreal`s FanTasia International Film Festival kicks off tomorrow and like all large festival a measure of its success can be found in the numbers alone. The fact that it has survived and grown over the past 19 years is reason enough but here`s a quick take at what`s in store for lovers of “fantastic visions” from filmmakers around the world: This year 135 features, and nearly 300 short films from 36 countries will spill across screens from July 14 to August 4.

The Festival`s opening gala film is a marvellous animation from Japan that is making its North American Premiere. Titled Miss Hokusai, director Keiichi Hara will be on hand to introduce his film and help to official get things rolling. Produced by the legendary studio Production I.G, the action is set in 1814 and it`s an exciting time to be in Edo, the future Tokyo. The city is the perfect place for an audacious artist such as Tetsuzo, known by hisnom de plume Hokusai, and his hotheaded daughter O-Ei, an accomplished painter who frequently assists her father. In fact, she goes so far as to create complete works that her mentor then signs, but her powerful style and inexperience bring headaches upon them, such as clients who fear their new acquisitions are possessed by demons. O-Ei and Tetsuzo always come out ahead, though, thanks to their resourcefulness and their circle of friends, including Zenjiro, a former samurai who has taken up the brush, and Hatsugoro, Tetsuzo’s best student and the apple of O-Ei’s eye. It sounds charming and the trailer on the FanTasia website is wonderful.

As our focus is on Canadian films, here are just some of the titles to look for:

The Editor. From directors Adam Brooks and Matthew Kennedy, this brilliantly gory spoof of the giallo subgenre — those perverse 1970s Italian whodunits — this is a classic Euro-horror satire, no matter how you splice it. The Editor was an official Selection at TIFF 2014 and the San Francisco International Film Festival 2015.

Lady Psycho Killer is a US/Canada co-production from director Nathan Oliver. In this World Premiere, there’s a Lady Psycho Killer on the prowl, and she’s out for the blood of anyone with XY chromosomes. A fun, witty film, featuring appearances by Michael Madsen, Malcolm McDowell and Quebec fetish icon Bianca Beauchamp, anchored by a breakout performance from Kate Daly.

On the Horizon, from Québec-based director Pascal Payant. The World Premiere feature asks, can a love that never should have been ever die? A triumph of talent and technical savvy over outdated economics of cinema and a lush, rich, evocative tone poem for the eyes, ears and broken heart. 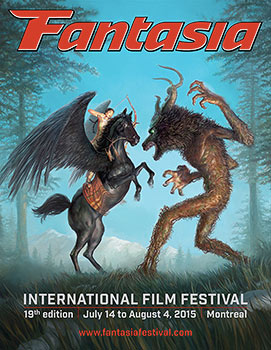 Scratch is also a Québec film that will also have its World Premiere at FanTasia. Directed by Sébastien Godron, this is a poetic, powerful film that deconstructs a reality of Montreal life that is rarely addressed on the big screen. With its entrancing soundtrack, solid performances and intrinsic spirit, Scratch will leave more than a mild scrape on Quebec cinema.

The Reflecting Skin is a UK-Canada co-pro from director Philip Ridley. Originally release in 1999 is is a special 25th Anniversary screening. We’re all familiar with the prairies as a pastoral landscape of bountiful crops and quaint farmhouses, but if you’re eight-year-old Seth Dove, it`s also a nightmarish world of murdered children, parental madness and day-walking vampires. This will be the premiere public screening of a new 2K restoration of Ridley’s dark, poetic masterpiece, painstakingly supervised by the filmmaker himself to create the definitive visual representation, above and beyond what was possible at the time of The Reflecting Skin’s original theatrical release.

These films are just two that fall in FanTasia`s Fantastical retro & Restorations program that contains seven films, including the US-South Africa film Roar from 1981 and a remixed, revamped 3D version of the 1979 holiday stop-motion classic The Nutcracker from Japan.

Other Canadian films on the schedule include Grant Harvey`s latest, A Christmas Horror Story. This World Premiere screening is actually an anthology of cinematic tales all wrapped up in a feature. These intertwined holiday terror tales come from the team behind the Ginger Snaps franchise, with a cast that includes WilliamShatner, Julian Richings and one hell of a Krampus. There’s a gift for every horror fan under this tree.

Then there`s Antisocial 2. This much anticipated follow up to the runaway indie hit,Antisocial was directed by Cody Calahan and written by Calahan, Chad Archibald and Jeff Maher. It will have its World Premiere at Fantasia. Distributed by Breakthrough Entertainment, whose Executive Producer Peter Williamson said “It’s a special honour that Fantasia has invited Breakthrough and Black Fawn’s sequel Antisocial 2 to premiere for the most discerning genre fans in the world.” The film stars Michelle Mylett, Stephen Bogaert, Josette Halpert, and Samuel Faraci. 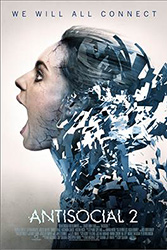 The team of Breakthrough Entertainment and Black Fawn Films have another film making its World Premiere at FanTasia. It`s titled Bite. While on her bachelorette party getaway, Casey (played by Elma Begovic)—a bride to be—gets a seemingly harmless bite from an unknown insect. After returning home with cold feet, she tries to call off her wedding but before she’s able to, she starts exhibiting insect like traits. Begovic said this of her experience making the film, “Working with Black Fawn Films has allowed me to be part of a scary, and at times sexy film, and director Chad Archibald truly gave me the opportunity to stand tall and proud behind my character.”

One of the Canadian shorts screening this year is the horror-comedy that Fangoria Magazine called “Deliciously Vile.” A Tricky Treat is directed by award-winning filmmaker Patricia Chica and it will have its World Premiere at Fantasia on Saturday July 25th at 6:45pm. The director and her team will be in there to introduce the film.

CBC’s Save Me Online