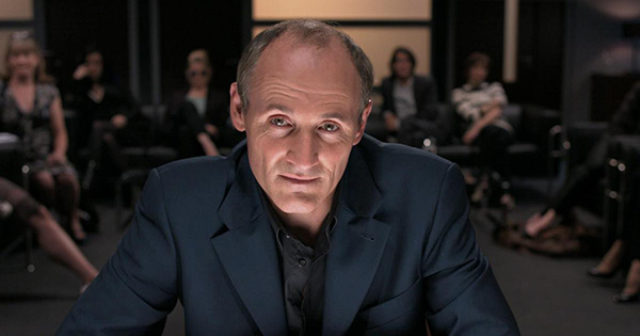 A commanding presence whenever he’s onscreen, Colm (pronounced Column) Feore is a classically trained actor who has built his career playing both legendary characters and unknowns with unnerving conviction. Whether he’s playing a small but solid supporting role in a Hollywood blockbuster, or scalding the screen with his intensity in a starring role, Colm Feore effortlessly projects an intelligence, elegance and grace.

He was born in 1958 in Boston, Massachusetts to Irish parents. While he was still a baby, his family spent a few years in Ireland, before settling in Ottawa, Ontario in 1961.

At exclusive Ridley High School in St. Catherines, Ontario, Feore – nicknamed Fee – excelled at public speaking and played first-team football. He also appeared in a number of school theatre performances and house plays. His skill as an actor was noted by his drama teacher, who convinced young Feore to audition for the National Theatre School of Canada in Montreal. After graduation in 1980, he joined the prestigious Stratford Festival Company, and a year later became associate director. During his 13 seasons with the Stratford Festival, he performed in over 40 productions, playing virtually every classical leading man, from Richard III and Iago to Romeo, Hamlet and Cyrano de Bergerac.

In 1986, CBC-TV filmed a performance of the Rodgers and Hart musical The Boys of Syracuse, which starred Feore as Antipholus of Ephesus. Two years later, he played Petruchio in the filmed version of The Taming of the Shrew, and his interest in acting on-screen had been piqued.

Unfortunately, Feore’s first film and television roles weren’t nearly as prestigious as his theatre ones. In 1988, he had a small role as a member of a Russian strike force in Iron Eagle II and appeared as in the television movie, Blades of Courage.

The following year brought Feore guest appearances on episodes of War of the Worlds and Friday the 13th. In 1990, Feore won a significant role in the Genie nominated Bethune: The Making of a Hero, which starred Donald Sutherland, and impressed audiences with the strength of his performance.

In the funny, uplifting and poetic feature, Beautiful Dreamers (1990), he won his first on-screen starring role as Dr. Maurice Bicke, the real-life superintendent of a 19th-century insane asylum who meets Walt Whitman (Rip Torn). Inspired by the poet’s avant-garde ideas about mental illness, sexuality and emotions, Dr. Bicke radically transforms the way his patients are treated. Beautiful Dreamers was nominated for four Genie Awards in 1991.

In 1992, Feore appeared on an episode of the popular Canadian series Street Legal and in the Adrienne Clarkson-directed made-for-television movie Artemisia. But the following year would bring him his most significant and captivating project yet.


Some critics suggested that within the film’s unique structure, his sterling performance made it easy to forget that he was playing a role. The film was universally lauded and won four Genie Awards including Best Picture. It also screened at the 1993 Toronto film festival and won the Special Jury Citation for Best Canadian Feature Film.

The following few years brought him roles in the staged television version of Romeo & Juliet (1993), the made-for-television murder-mystery The Spider and the Fly (1993), Friends at Last (1995), Where’s the Money, Noreen? (1995), episodes of Forever Knight (1995) and Kung Fu: The Legend Continues (1995). In 1994, Feore decided to leave the Stratford Festival in order to focus on his screen career. The same year he also married his second wife Donna, a stage manager and choreographer in Stratford.

With his profile raised significantly, Feore soon began receiving offers from U.S.-produced projects, and soon appeared in the HBO-TV biopic Truman (1995), as the wheezing press secretary Charlie Ross, and in the CBS-TV miniseries Night Sins (1997), as an unstable church deacon with questionable motives. That same year, Feore also appeared in two major Hollywood films: in Sidney Lumet`s Night Falls on Manhattan, in which he played Elihu Harrison, one of the heir apparents in the D.A.’s office who tangles with the newly-elected D.A., played by Andy Garcia, and in John Woo’s stylish Face/Off he played Dr. Malcolm Walsh, who performs the surgery allowing Nicolas Cage and John Travolta to swap identities. Later in 1997, Feore appeared in the television movie Hostile Waters, about a real-life U.S./Soviet submarine accident; in former Kids in the Hall Dave Foley`s The Wrong Guy; the PBS epic historical miniseries, Liberty! The American Revolution; and the black comedy Critical Care.

The next year, brought Feore roles in the action movie Airborne, the dramatic thriller The Lesser Evil, Peter Benchley`s Creature and as Meg Ryan`s fiance in City of Angels. Also that year, he appeared in François Girard`s acclaimed The Red Violin, which won eight Genie awards, including Best Picture, and was nominated for Best Foreign-Language Film at the 2000 Golden Globes. Feore was recognized as the 1999 Best Supporting Actor by the Jutra Awards, which honour achievements in Quebec film. Also in 1999, he appeared as Colonel John McCrae in the Heritage Minute production episode titled In Flanders Fields. He also embodied pure evil as Satan`s minion in the Stephen King miniseries Storm of the Century. He then appeared in two provocative and wildly different films. He was Marcus Andronicus in Julie Taymor`s Titus, the ambitious reworking of Shakespeare`s much-maligned play, and joined the lauded ensemble cast of Michael Mann`s Oscar-nominated docudrama The Insider.

The following three years allowed Feore to further hone his skills at both villainy and timidity with roles in the television movie The Virginian (2000), the miniseries Nuremberg (2000) – as Rudolf Hoess – the thriller The Caveman`s Valentine (2001), the American epic Pearl Harbour (2001) and the Canadian ensemble film, Century Hotel (2001).

He also appeared in the acclaimed Canadian drama The Perfect Son (2000), as a closeted HIV-positive gay man who is reunited with his estranged recovering addict brother after the death of their father. Feore was nominated for his first Genie Award for Best Actor, along with his co-star David Cubitt. Also in 2000, he appeared on episodes of the critically acclaimed series, The West Wing, and Boston Public, which co-starred fellow Northernstar, William Shatner.

In 2002, Feore played his most prolific role since he played Glenn Gould nearly 10 years earlier. And it would be the role that perhaps he was born to play. The role he was given was the lead role of the CBC-TV mini-series Trudeau, about the most famous, influential and provocative man in recent Canadian history. It took a great deal of courage to take on the role of Pierre Eliott Trudeau, a man both villain and hero, and portray him as accurately as possible. The overall response from audience and critics alike was that his performance had the same charisma and passion as Trudeau himself. Feore was honoured with the Best Actor Award at the 2002 Gemini Awards.

As well as his starring role in Trudeau, Feore was involved with no less than eight projects in 2002. These included an appearance in two television movies, three miniseries, providing the voiceover for Napoleon, as well as appearances in three films, including the hit The Sum of All Fears, with Ben Affleck and Morgan Freeman, and the hugely successful Chicago, which was shot in Toronto, Ontario. In that film, Feore played the district attorney attempting to prosecute heroine Renée Zellweger. He was able to show off his singing and dancing abilities and shared the Screen Actors Guild Award for Outstanding Cast Performance with his fellow actors in 2003.

In 2003, Feore co-starred in Martin Lawrence’s National Security as detective Frank McDuff, and Highwaymen, which stars Jim Caviezel and co-stars Gordon Currie. He also finished the HBO-TV movie And Starring Pancho Villa as Himself, which costars Antonio Banderas, Alan Arkin, Michael McKean and Jim Broadbent. Other efforts early in the new century included the John Woo thriller Paycheque, with Ben Affleck, Uma Thurman and Aaron Eckhart, and the sci-fi thriller The Chronicles of Riddick, with Vin Diesel and Dame Judi Dench.

The theatrical snobs of Stratford question Feore’s work in films and television, while those in the film industry are bewildered by the time he chooses to spend onstage, rather than on set, but they were thrilled when it was announced in the summer of 2002 that he would be returning to the Stratford stage as Henry Higgins in My Fair Lady. And with his roles in theatrical films such as Chicago, it’s clear that he hasn’t forgotten his first love.

You could say that Colm Feore is a chameleon-like character actor, whose physical bearing and manner of speaking allows him to convincingly portray attorneys, generals, barons, press secretaries, surgeons, detectives or government officials in big-budget Hollywood movies. Or you could say he was a handsome, charismatic leading man, as revealed by his performances on-stage at Stratford and in Trudeau. Or with his sharp, angular features, often sinister smirk and roles in The Caveman`s Valentine, Nuremberg and The Storm of the Century, you could categorize him as an impressively evil villain. As the first decade of the new century reached its mid-point there were no signs of him resting on his laurels or beginning to slow down. The critically acclaimed mini-series, Empire brought a lot of attention and it was just one of five television or film projects completed in 2005. In 2006 he co-starred in the box-office hit, Bon Cop, Bad Cop. In that rarest of all Canadian films, a sequel, Bon Cop, Bad Cop 2< /em> will be released in early 2017 with costar Patrick Huard and Feore reprising their roles as two cops from different sides of the Québec-Ontario border.

He’s made more than 20 features since then but it was his role as Cardinal Della Rovere in the hit television series The Borgias that brought him more attention and a lot of press when it was launched in 2011. The role demanded he play the bad guy while sheathed in the robes of one of the highest offices of the Catholic Church. It is classic Feore and he owns the screen in every scene he played. Fellow Canadian actor François Arnaud was also in the series.

What is truly remarkable is the sustained quality of the work across a wide range of characters across a couple of decades. It seems that no matter who Feore becomes on stage, television or film, he is eminently watchable and it is safe to say he will continue to be so.

This biography of Colm Feore is Copyright © 2017 by Catherine Solmes and may not be used without prior written approval. Click here for more information about copyright.